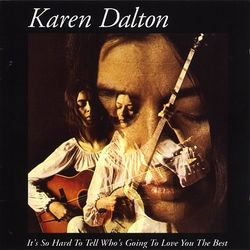 Folk music enthusiasts should have a look at a site called Keep the Coffee Coming, which I just found tonight. It's a really rich resource of contemporary and classic folk music, with great photography providing colour (though most of it's in black-and-white), and context.
I find myself listening more and more to folk music these days. It's considered unspeakably unfashionable by those who couldn't spot the perfect answer to the times if it bit them in the ass, but for me almost everything else musically sounds phoney, over-produced, lacking in finesse, conservative.
The URL for Keep the Coffee Coming is http://katry.blogspot.com. Expect to be there for a while.

Speaking of folk, Fred Neil described the voice of my new love Karen Dalton as being "like a letter from home". Perfect! I don't know why, but that's exactly right.
I read on another site, I think it was the Dylan site Expecting Rain which Leo Kulinski referred us to in the comments field here a few days ago, that the Band's song "Katie's Been Gone" is rumoured to have been about Karen. Well, she was famously reclusive, or so the sketchy information about her on the internet has it.