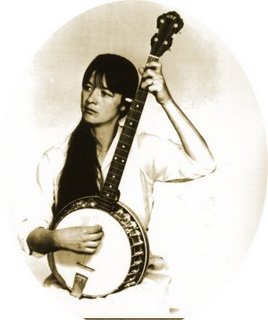 The first review of Bob Dylan's forthcoming "Modern Times" cd I've seen--Robert Hilburn's in "Mojo" magazine--suggests it will be a worthy successor to 2001's "Love And Theft" and '97's "Time Out Of Mind", marking, if I have my Dylan history correct (and I'm enough of an expert to believe I do), the first time our braying hero has recorded three great consecutive albums of new material since the Seventies (I should explain to fellow Dylan enthusiasts that unlike many of you I love "Planet Waves" and "Desire"). Well, wonders never cease with old Bob.
Folkniks and Bob Heads might want to check the cd that comes with Mojo this month. It's called "The Roots of Bob Dylan: 15 Tracks That Inspired The Legend", and although Chrome Dreams (I think it was), released an album of roots music and blues organised around the same theme a while ago, this has some material in it that's well worth the £4.10 cover price of the magazine, including a Big Bill Broonzy blues ("When The Sun Goes Down"), that speaks as much of the influence its artist had on the Rolling Stones as it does of the influence on Dylan, and something of particular interest, a track by Karen Dalton, described by Dylan as "funky, lanky and sultry" and "my favorite singer" in his memoirs, and almost completely anonymous in her day, by all accounts, despite having a voice as good as anyone in folk music (in fact Dylan himself likened her style to Billie Holiday, though it's less vulnerable, more sexual, than Billie's). I saw Karen's album and passed it by in HMV the other day, but I'm thinking of going back the next time I get paid and making a purchase, after hearing her on this one.
Any readers out there know what happened to Karen Dalton?
Oh. The last track on the "Roots of Dylan" album is by Thelonius Monk. If that means nothing to you, dear reader, then I humbly suggest you go to HMV as well.
pic: Karen Dalton, who sings as good as she looks.

Leo said…
Hi Bruce. I did some googling on Karen Dalton. It seems she died a while back. More info here:
http://www.expectingrain.com/
dok/who/d/daltonkaren.html
10:47 PM

Bruce Hodder said…
Thanks Leo. I'll check it out. Welcome to the comments field, by the way!
11:02 PM