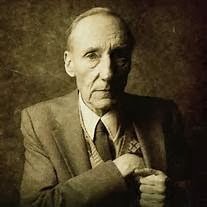 On February 5th, William S. Burroughs would have been 100 years old. Burroughs, with his razor-like intelligence and impatience with all bullshit, sentimental or otherwise, would probably have called that a meaningless statement. He's dead, so what he would have been makes no difference.

It will be a boring ride for some, no doubt; and an unpleasant ride for others. For those with open minds I hope it will be as thrilling as it is instructive. But if we all hold hands and walk fearlessly through the coming days we'll get to the other side. I promise.

The poll of favourite Burroughs novels is the first feature of Centennial Week. Which did you like the best? Even if you've only read one but you liked it, please vote. It will be fascinating to have a snapshot of attitudes towards this most challenging, but brilliant, writer 100 years after his birth.
William Burroughs