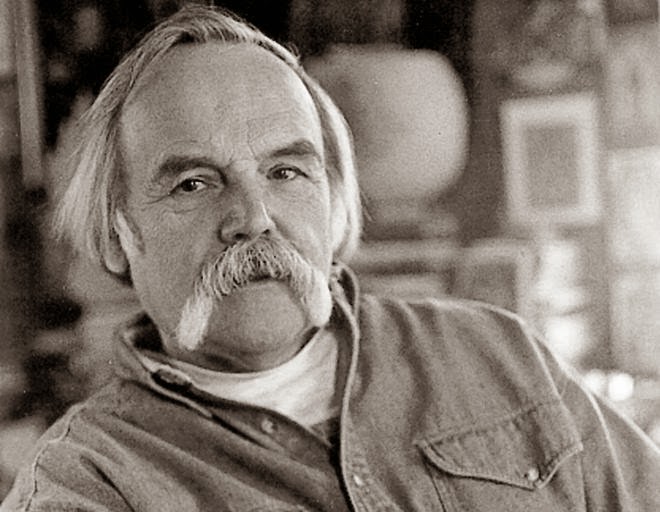 Creative scenes need facilitators. People with the energy and drive to get things going, to inspire other people to step out into the light, however fearful they might be. We need facilitators because everything we encounter as artists tells us that what we live for is unwanted. Selling cars and houses is important; getting the delivery out before shift's end is socially useful. Being a poet is whimsy, frippery, a pretentious excuse for laziness.

In Northampton the great facilitators over the last few years have been Jimtom Keith Thomas James and Justin Thyme. Their monthly poetry nights and the annual Bardic Picnic have engaged most of the talent in town at one time or another. I've felt the buzz they created myself, although performance poetry is not really my thing. I'd like to be able to do it, but the second (and last) time I tried it, I hated it.

In my writing life I've known two facilitators of the written, rather than the spoken, word; and both have been really important to me. One, Bryn Fortey, published me alongside many stellar names (Dave Church, Barry Tebb, Henry Denander, splake) in his fantastic magazine "Outlaw." Because of Bryn's encouragement, I got better and better as a writer. Illness, a bad job and a destructive relationship eventually took away almost all my self-belief, but that's life for you. It usually does get in the way.

The other facilitator who had a big impact on me was Norbert Blei. He's a minor legend in American prose and poetry, so I'm sure I don't have to tell you too much about him. But he published many things by me and countless others in really high quality books, as well as online. There are people writing today who would have given up a long time ago, without Norb's encouragement. I'm one of them.

Anyway, this is my long-winded way of announcing that "Rosebud" magazine, issue 56, features an article called "Remembering Norbert Blei" by his friend and collaborator, poet Robert Zoschke. If you have a few pennies to spare maybe it would be worth investing in. Norb was a wonderful, inspirational man, and I'm sure if anybody can catch that properly it's Rob Zoschke.Feeling pours out of Rob's writing arm like no one else I know.

Henry Denander said…
Well said, Bruce, and I agree with everything you say about Norb and Bryn and Robert. I ordered Rosebud. Thanks
9:38 AM

Bruce Hodder said…
Hi Henry. You have had a strong influence of your own on small press poets and writers, with your fine little books. Look for them, everyone.
11:02 AM