How The Beatles Got Out Of The ABC 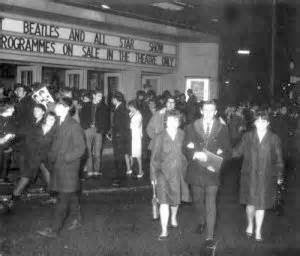 As everyone over a certain age in Northampton knows, the great white edifice at the top of Abington Street, which Charles Bradlaugh's statue points sternly past, hasn't always been occupied by the Jesus Army. Once it was a cinema, and on November 6th 1963 an up-and-coming band called The Beatles played there.

I've often wondered about that show. I've even written a poem (of sorts) about it. I suppose it fascinates me because we rarely come so close to the absolute centre of history. I walk past the building where that concert took place all the time. And John Lennon bloody well played inside.

I found out more about it today. Well, not the show, so much as how it ended. The Beatles, who had no doubt employed the same tactic at gigs across the country, sent decoy Beatles (mock mop tops?) out through the main entrance and escaped out of the rear. They raced across what's now the multi-storey car park and into the building where--appropriately--the Spiral Archive record shop now plies its trade.

A limousine waited in the street outside and spirited them away to the next performance. Leaving the residents of Northampton, I presume, none the wiser. If there are any 65 year old women reading this who have lived all their lives believing they touched George's hair outside the ABC that night, all I can do is apologise profusely. But it's a great story isn't it?
Charles Bradlaugh John Lennon Northampton Spiral Archive The Beatles