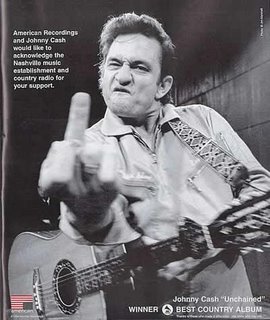 The Johnny Cash autobiography is a fantastic read. He wrote it in 1997 after his creative renaissance with Rick Rubin and American Recordings and it's imbued with the vitality and certainty of an artist who's on top of his game again. He tells of his friendship with Elvis, Jerry Lee Lewis, Roy Orbison, Bob Dylan, and his relationship with the true creator of rock and roll, Sun Records supremo Sam Phillips--stories any self-respecting fan of contemporary music will want to read. This is not the rather pious Christian we studiously avoided in the Seventies and Eighties. He doesn't deny his faith--why should he?--but he doesn't deny his frailties and failings either: a particularly powerful scene in the book shows him sick and shivering in amphetamine sweats on one side of a hotel door while Roy Orbison knocks on the other side, trying to gain admission to visit with his old friend and Hickory Lake neighbour. Cash can't move, so ashamed is he of his own physical condition, so unready is he to face the grief Orbison will be carrying after the deaths of his wife and two children all within a few months of each other. (Orbison, when Cash apologised to him later and explained the situation, said, "We've all been there." And haven't we just.)

A glance at various internet sites and a listen to arts review shows reveals that Cash has now transcended the country music tag that used to define him. He's regarded these days as some kind of monolith of rock and roll, godfather to all the alternative bands wrestling with booze and drugs to live honest lives in a dishonest world. Quite a feat for a guy I first saw on "Little House On The Prairie". But the contemporary image of John may be closer to the truth than that massaged, infinitely sentimental picture he presented back then, not longer after his suicide attempt and the fabled rescue of his wounded heart by June Carter: he was busy trying not to die in those days, he can be forgiven for losing some of his harder edge (you want suffering? go out and suffer for yourselves). Cash had a depth that his flirtation with the more self-righteous, conservative fringe of American Christianity could never rub off. Listen to any of the earlier recordings and you'll hear it. Listen to any of the later recordings and you'll hear it. Even Waylon Jennings wouldn't have consented to an advertising campaign like the one featured in the picture above.

Bobby said…
Nice blog, landed here at random. Yeah, Johnny Cash . .. the other day I was trying to imagine what the conversations were like between Cash and Sound Garden - or between Cash and Trent Reznor - like when he decided to cover their songs - can you imagine?
4:54 PM

Bruce Hodder said…
Yes, monosyllabic on both counts, I would bet.
5:43 PM

Anonymous said…
Just bought and listened to American V: A Hundred Highways...
I can't recall an album that has been able to bring me to tears before...not only tears...but that odd lip quivering thing...accompanied by shivers up my spine and down to my fingertips...
But this one did...
Sitting in my own living room, listening to the starkness and fragility in Johnny's voice is only a portion of it...
What is really eerie...is listening to the story that starts with Larry Gatlin's, "Help Me"...traveling through and stopping at Bruce's, "Further On Up the Road"...his own, "I Came to Believe"...and ending with, "I'm Free From the Chain Gang Now (Herscher & Klein)," is like sitting at the edge of his bed as he's saying his goodbyes...you can hear in his voice... surrenderance...There's ambivalence, pain...exhaustion...the handing of his soul over to a power greater than he...and finally peace...
For Rick Rubin to capture and produce this album speaks to relationship he had with Johnny...
If only we could all say our goodbyes this way...
7:19 PM

Bruce Hodder said…
I haven't heard the album yet, but I've heard a few tracks from it. The tremble in his voice is heart-rending, but the honesty is impressive. This was not a man given to vanity. He's showing us how to die with grace and intelligence, but he isn't lying about what it costs to say goodbye.
Cash was a great man...
8:46 PM