'Ratched' is an Entertaining Let-Down

on September 20, 2020
Ratched arrived on Netflix the other day. It's based on one of American literature's most memorable creations, Head Nurse Mildred Ratched from Ken Kesey's One Flew Over The Cuckoo's Nest. Everybody who read that book, or saw the movie of the same name, was chilled by Ratched's cold, brutal domination of the ward at the acute mental hospital in which. the protagonist, and Ratched's antagonist, R.P. McMurphy arrives after doing time at a prison farm for statutory rape. (How times have changed. Imagine trying to sell that as a heroic backstory now.) He isn't mentally ill; he wants to avoid hard labour for the rest of his sentence - which by any reckoning is profoundly sensible. The question of how mental illness is defined and how it should be treated is of key importance to Kesey's novel and the film.
This new show is, in one respect, a prequel to Kesey's novel because it presents us with the early life of Mildred Ratched. It shows her, in the pilot we watched last night, getting her first job in a mental hospital. She is already displaying the cruelty and menace of her later incarnation and we learn why. The show's star Sarah Paulson even bears some resemblance to Louise Fletcher's Ratched from the movie. But that's where the similarities between original and prequel end. 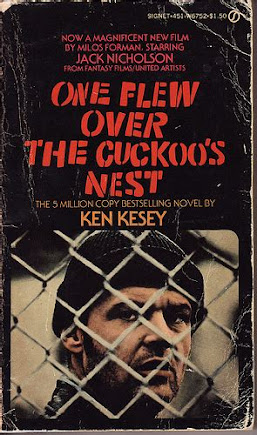 Ratched is described as a 'psychological thriller drama' or a 'psychological horror drama'. It's genre, and Paulson's Ratched is a grotesque, drawn so large her wickedness is less shocking than it is comedic. This is the sort of tv you watch to laugh at each new grizzly murder or incredibly rude comeback. Kesey's Ratched - and Fletcher's Ratched - was frightening because her evil (if such a thing exists) was coldly banal. I worked with more than one person who Kesey might have modelled his Head Nurse on in my 15 years as a care worker. They were appalling, cruel people, completely lacking in empathy, and they went home every day to partner and children and led utterly normal lives, popular in their communities and untroubled by conscience.
I intend to watch the rest of the series, though. It may be derivative and occasionally predictable; it may be yet another show that depicts the mentally ill as physically ravaged, stooping, body-slashing maniacs (some are, most aren't); but it's also great fun, something colourful and stylish to sit down with for an hour before you go to bed. If you want something deeper you can go back to the movie or the book. Then you'll really learn about the true nature of madness, and the improper exercise of power.