Casablanca and Its Warning 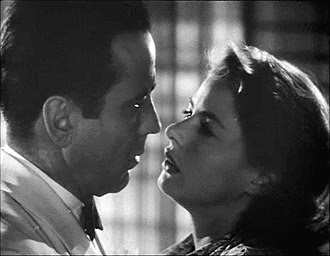 Last night's movie at Bard Towers was Casablanca. If you're not familiar with the movie - and younger readers and movie watchers might not be - Humphrey Bogart plays the cynical Rick Blaine, who runs a bar in the unoccupied French territory of Morocco in the early part of WWII. Ingrid Bergman plays Ilsa Lund, the wife of Victor Laszlo (Paul Henreid), a Czech resistance leader who has escaped from a German concentration camp and is seeking passage to America to continue his work against the Nazis. Rick can get him to America because he holds letters of transit given to him by Ugarte, a petty crook, played by Peter Lorre. But the letters were obtained by the murder of two German soldiers, which makes possession of them dangerous, and anyway, Rick doesn't want to get involved. Politics is not for him, he says; he's just a poor bar owner.
And at the beginning of the movie he's serious. This is a wartime film, however, released in 1942, so you wouldn't expect America's most famous flinty, pistol-wielding hero to stand by for too long as the Nazis press their jackboot down on a city run by a French authority that's apparently too weak to assert itself. Rick once loved Ilsa and she broke his heart; that's why he won't help anybody but himself. When he learns that she broke his heart to save him from the Germans as Paris fell, however, Rick begins to see daylight again, and decides to help her and husband. 'I'm no good at being noble,' he tells Ilsa,  'but it doesn't take much to see that the problems of three little people don't amount to a hill of beans in this crazy world.'
That's just one example of some of the richest dialogue you'll ever find in movies. Julius & Philip Epstein and Howard Koch's screenplay, based on the play Everybody Comes to Rick's by Murray Burnett and Joan Alison, gave the world, 'We'll always have Paris,'  and a line I wish I'd written, 'Of all the gin joints in all the towns in all the world, she walks into mine.' Beat that. 'Here's looking at you, kid,' one of the film's most legendary quotes, was allegedly ad-libbed by Bogart. I really want that to be true.
Fans of Casablanca will notice that I've missed one quote. It's the last line of the movie. Rick and Captain Louis Renault (Claude Rains), who's the leader of the French authorities in the city, are standing at the airport in a worryingly thick but no doubt metaphorical fog, having just seen Laszlo and Ilsa off in a plane. Rick has killed Major Strasser (Conrad Veidt), the German officer who has come to arrest him, expecting no resistance from Renault, who throughout the film has protested his complete lack of scruples. Renault, however, is tired of collaboration, and instructs his own officers to 'round up the usual suspects.' As Rick and Renault walk away together, the latter outlines his plan for Rick's escape. 'Louis,' Rick says, 'I think this is the beginning of a beautiful friendship.'
I don't know why, but that seems incredibly poignant watching 78 years later, in our present hothouse political climate. It's regrettable enough that so much of England sees Europe as its enemy now, although the EU itself may have contributed to that alienation with its one-size-fits-all politics. But when an American president is a fascist in everything but name, and has more in common with extremist bullies and dictators than he does with the leaders of France and Germany, you can see how far we've come since the days of the beautiful, pragmatic, peace-delivering international friendships that began in the ferment of World War II.