Rare and Collectable: Rexroth & Ferlinghetti 'Poetry Readings in the Cellar' 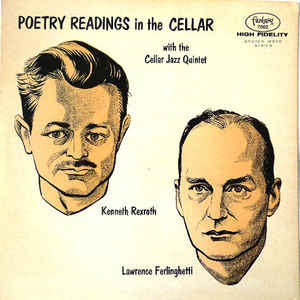 This was recorded in 1957 in the Cellar on Green Street, San Francisco, and released on the Fantasy label. The Cellar, apparently, was a downstairs nightclub that in a previous incarnation was a Chinese restaurant. The album features Kenneth Rexroth, the reluctant and sometimes unacknowledged progenitor of the West Coast bohemian scene, and Lawrence Ferlinghetti, the legendary poet and City Lights bookstore owner, whose most celebrated cultural achievement, perhaps, was publishing Allen Ginsberg's Howl in his Pocket Poets series. Ferlinghetti almost went to jail for that bold visionary act, but thanks to a landmark decision by Judge Clayton Horn, what resulted from the Howl obscenity trial was a liberalisation of poetic expression in the Western world, enormous publicity for Ferlinghetti's store and publishing house and global fame for Ginsberg.
Here, Rexroth and Ferlinghetti read poems and the Cellar Jazz Quintet accompany them, improvising impressively. (To me Rexroth's voice is weirdly like Tom Hanks when he's in deep character.) On the original vinyl lp at least - I haven't heard the cd reissue - the sound is wonderful. I don't have the critical vocabulary to explain why it's so good, being neither a critic nor a musician, but I love the way it transports me, when I hear it, back to the time when High Fidelity was the most advanced technology they had. I could almost look out of my window and see businessmen in macs and fedoras coming home from work in the dark. Sound on cd tends to be so clean and pure all the atmosphere is distilled from it.
ruth weiss, who waitressed at the Cellar but also mesmerised audiences with her readings there, famously said, 'Ferlinghetti and Rexroth were poets who read over jazz; but jazz was part of me; I swung.' That's true, but it doesn't matter. Both wrote great, intelligent poetry - Rexroth sometimes overtly, angrily political; Ferlinghetti hipper, funny, subtly political - and some of it is represented on this record. They're not jazz poets, they're poets of words and ideas vocalised over microphones, but the Quintet are sensitive accompanists who weave their jazz around and through the orations so they're given greater emphasis and emotional context. Which is to say that you might understand what they say a little easier and give them more attention because of the jazz, and if you're encountering Rexroth for the first time you might need the help.
Highlights for me are Rexroth's 20 minute reading of 'Thou Shalt Not Kill (In Memory of Dylan Thomas)', which at certain points rises to such magnificent rhetorical levels it has echoes of the Moloch section of Howl; I also really like Ferlinghetti's Autobiography. But Ferlinghetti has an impish charm that makes everything he does appealing, even if he sometimes seems a little too cute and doesn't quite get to the meat of the matter. You'd certainly rather spend a night out with him than intense, grumpy old Kenneth, snarling anarchist slogans through his well-groomed moustache.