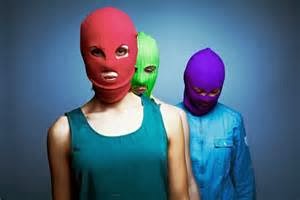 The shameful treatment of Pussy Riot at the Winter Olympics was noticeably under-reported by Western media this week. We saw the pictures, but all of the debates about our responsibilities towards those feeling the whip hand of repressive Russian government were exhausted before the tournament had even started. Most of us would agree that the public flogging of a musical group engaged in a funny demonstration is ugly and excessive, but we would prefer to be able to focus on the curling thank you very much.

Vladimir Putin and his thugs know nothing about the true nature of rock and roll anyway. If they really want to neutralise whatever threat Pussy Riot pose to their nasty bigoted criminal rule, they should give the band a multi-million pound contract with a major label; and then let them headline big shows in Moscow and St Petersburg. Nothing sucks the juice out of rebellion like success.
Pussy Riot