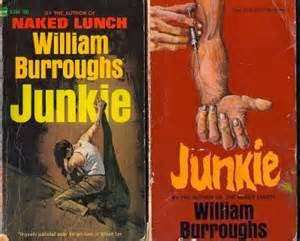 Poll results are in. The favourite William S. Burroughs novel of "Suffolk Punch" readers is his first novel, "Junkie," luridly subtitled "Confessions of an Unredeemed Drug Addict" in the first edition, and published in 1953 under Burroughs' pseudonym William Lee.

Beat enthusiasts will know that Allen Ginsberg acted as Burroughs' literary agent for "Junkie" (English spelling "Junky"). The subject matter being rather dangerous in 1950s America, Ginsberg could only find a home for the manuscript at Ace Books, run by Carl Solomon's uncle A.A. Wyn. Burroughs took an $800 advance.

To soften the impact of "Junkie" on readers--or perhaps to deflect the inevitable criticism of Ace that would come from the moral watchdogs of pre-"Howl" America--Wyn published the book in conjunction with a forgettable(and forgotten) 1941 text by a former FBI agent, Maurice Helbrandt. This was called "Narcotic Agent" and subtitled, fabulously, "Gripping True Adventures of a T-Man's War Against the Dope Menace."

Burroughs, before the publication of the book, called the "sandwiching" of the two works "an appalling idea," but since he needed the money, he didn't interfere. Later, in a letter to Ginsberg, he admitted, "'Narcotic Agent' not so bad as I expected it would be. He does not sound like an overly obnoxious character."

"Junkie" was written in a conventional narrative style. It wasn't until much later in the decade that Burroughs began the really radical experiments with form and content that made him an avant-garde legend. (I don't think his rep is entirely based on the murder of his wife.)

Those books, from "Naked Lunch" on, aren't really for reading, not in the same way that "Junkie" is. Some of them, in fact, are exasperating, and hard to finish. When you encounter page after page of apparently nonsensical, disrupted narrative, as you do with some of the Burroughs works, the natural impulse is to throw the book at the wall.

I have been through that. It's why I have almost everything by Jack Kerouac and Allen Ginsberg on my shelves and barely a third of the William Burroughs ouevre. But I feel, reading interviews with him and thinking about the books I have read, that Burroughs is the one from whom, perhaps, there has always been most to learn.

As William himself might say, I shall investigate further, and then file my report.
Allen Ginsberg Carl Solomon Jack Kerouac William Burroughs