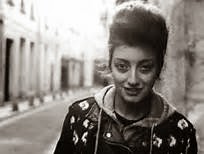 Pascale Ogier was the actress I most liked to watch in my late teens. She was in three movies I saw in those days: “Le Pont du Nord,” in which she appeared with her mother Bulle, “Ghost Dance,” with Robbie Coltrane and Jacques Derrida and “Les Nuits de la Pleine Lune,” directed by Eric Rohmer. All of them were shown, at one time or another, on English television, although “Full Moon in Paris,” to give the last of the three films its English title, didn’t appear until after Pascale had died.

I didn’t know that when I saw it on tv, although somehow I found out before I bought the film on VHS. All I knew, watching each movie in turn, was that I was captivated. She was beautiful, with a turn on the style of the best young women of our generation that was very individualistic and very French. (The measure of her individualism is that she designed her own [and other] costumes in “Full Moon in Paris,” as well as having credits for production design.) And, in the films,she was working with Jacques Rivette and Rohmer and talking about ghosts with Derrida, who mystified me. I had just dropped out of formal education and discovered the life of the mind. I loved anything that was clever and stimulating, even if I didn't understand it.

How Pascale passed away soon after “Full Moon in Paris” isn’t a matter for “Suffolk Punch.” Anyone who needs to know already does and serious students will be able to discover the facts of her life elsewhere. Even a short career shouldn’t be interpreted in the light of its brevity. What interests me, thinking about Pascale, is what the scarcity of information about her on the internet tells us. There are many online journals / magazines / blogs about counter-culture heroes, music and movie icons; but all I could find about Pascale is incomplete biographies with conflicting birth dates, hundreds of photos and sleazy blown-up stills of her naked taken from films. (Some people are real scumbags.) We seem to prefer our icons to be, on the whole, English-speaking. And men.

When I found out that Pascale was gone I was really sad, and embarked on a lifetime of French film-watching (when I could find them, or afford them), probably searching for a repeat of the lovely infatuation I had with her. “Le Rayon Vert,” the movie Rohmer made after “Full Moon,” or the next one after that, became one of my favourite films ever; and I adore the half-French “Before Sunrise / Sunset” movies even though everyone I’ve ever spoken to finds them tedious and self-indulgent. It’s that feeling they have, a certain feeling sometimes found in European movies, which English and American movies are rarely able to create.

In a sense I have been looking for Pascale in all of these films and I’ve never found her. Many of the experiences I’ve had, usually at home in front of the tv because French films are rarely deemed worth a wide release in the UK, have been moving, stimulating, inspiring—I’ve had every response you can imagine, though rarely boredom, which I’ve frequently done from Hollywood product. But you can never quite replicate the thrill of a first love, even a movie one. When I see a rare clip from one of Pascale’s movies I’m suddenly a skinny lost 19 year old again, living on movies, music and books and bursting with ideas about how to turn the world on its ass. Which is pretty much the person I am today, if you take out the “skinny lost 19 […]” part.

A few years after Pascale passed away I was in Paris and decided to spend my birthday in Pere Lachaise, the cemetery there where the French bury their great men and women of the arts. My primary purpose was to visit the grave of Jim Morrison of The Doors, but I’d forgotten that my birthday was also his birthday—which meant that his grave was inaccessible because of the number of tourists and scary Parisian cops clustered around it. Wandering away in the rain, pissed off, thinking I’d wasted my journey, I stopped on a certain path to light a cigarette and found myself looking at Pascale Ogier’s grave. A strange, almost unbelievable coincidence. I’d had no idea that she was here, although it made sense.

I moved in front of the grave, crouched down (with rain falling on my back and soaking me through my thin coat), and I read the inscription. What’s written there, again, is for other sites. As I crouched in front of the grave, though, musing on Pascale, and the person I was when I first saw those great movies, a man came up and asked if he could take my picture. He was French, but he spoke in heavily-accented English. Perhaps my complete lack of personal style gave away my nationality. I nervously said, “Yeah, okay,” and he asked me to look back at the grave. I don’t know what he wanted because before I could question him about his motives he’d taken the picture and walked away. I wish I had that picture now.
Bulle Ogier Eric Rohmer Jacques Derrida Jim Morrison Paris Pascale Ogier Pere Lachaise

Unknown said…
and indeed it looked very much (in pretty much I would say). What I like Hello Bruce,

I am Elsa, a french woman. I read your article about Pascale Ogier, I am a fan to. I discover Pascale when o friend of mine tell me "I saw a great movie the other day "Les nuits de la pleine lune" and the main character look like so much like you (behaviour and physically). You should see it"

Besides the fact that she really looks like me (in more attractive of course!), I was impressed by the delicacy of her act. What really pleased me by seeing her evolving in the history is that she appears as someone quite ethereal while she is a deeply physical personne. The need to seduce and to modulate forms makes integral part of this being.I don't think that character comes only because of the character of Louise, Rohmer wrote his scripts based his actors. louise and Pascale are greedy and graceful creative!

Finally, I am overwhelmed to read someone who shares my passion for Pascale. I often wonder too many questions about other possible worlds and the existence of ghosts, I also very much appreciate "Ghost Dance" deconstructed with this pace and this desire to talk about serious things without taking itself seriously.

Maybe I would have the pleasure of reading you soon to discuss our icone.

ps: I went to Pascale also Père Lachaise and I find the grave too
8:59 AM