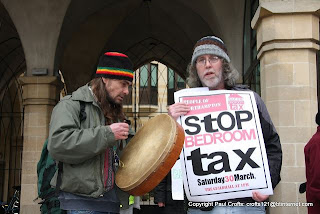 There’s a poet on the loose that everybody should be aware of. Many already are, on the performance circuit in the , but he's less familiar in the magazines and the books, I think. And that’s unfortunate because unlike some poetry that's performed, Jimtom Keith Thomas James' stuff is exceptional when it's read on the page as well. I just don’t think he sends it out to magazines as rabidly as a lot of poets do, although I could be wrong on that.

You know Jimtom the minute you see him. He usually wears a kilt, for one thing, and not always in the best kilt-wearing weather. Once I saw him kitted (or kilted) out in this, poetry’s most identifiable outfit, at the Labour Club in on a night when the rain was coming down so hard even Noah would have stayed indoors and played cards. But that’s Jimtom. It’s part of his thing and I don’t think there’s an ounce of calculation in it. Some people are just uniquely, preciously themselves.

It’s the same with his poetry. A lot of us in the small press are still working in the wake of the Beats, or Bukowski; other, younger poets have created a newer, high-energy, post-punk/ junk culture style. But Jimtom, and I haven’t asked him about this so I could be wrong, seems to take in William Blake, W.B.Yeats, even James Joyce – God knows who else – Faust? . . . and then he mixes all those influences up in a rich intellectual and verbal stew with the symbology of Paganism stirred in for seasoning. But don’t take my word for it. Have a look at him doing his stuff on You Tube.

Jimtom, in my opinion, is a modest genius, and the only person I’ve ever met who I envied just a little bit. Although with hard work (harder than I’ve put in these last couple of difficult years) who knows what's possible? He also acts as a dedicated facilitator of local poetry events and probably does a lot of other things besides. Fighting crime and rescuing baby seal pups, I don’t doubt. But if you’re interested in reading someone who defies all your expectations, and doesn't just meet the comfortable, unchallenged-for-too-long expectations of our alternative crowd, you know where to go now to find out more.