BOOK OF THE WEEK: "Exit Nothing" by Pat King 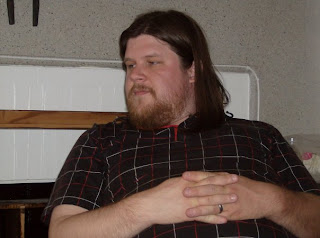 Pat King’s Exit Nothing has been around for a year or two now, but I suspect it will be around for a lot longer than that. It’s fabulous, a little classic novel of the counter-culture following its underground writer protagonist through cities, relationships, depressing jobs and the alternative arts scene. There we find a world of crazy poets, performance artists and new young writers determined to turn over the big table that the academics and the guys with the fat publishing contracts dine at. Even in the novel the success of their mission seems doomed, but it’s the doing of it that matters; having the passion, being alive enough to care. The narrator is alienated from his first wife, in fact, because she doesn’t have the courage to go all the way with her art. That’s part of it anyway. She’s good, but she won’t surrender herself to the life. And as Miles Davis said (or was it Charlie Parker?), “If you don’t live it, it won’t come out of your horn.”

I first became aware of Pat a long time ago when he was part of the Underground Literary Alliance, and those guys provide the model for the fiery young radical group the RWA in the novel. I recognise one or two of the other characters as well, which is weird, but it’s not some kind of roman-a-clef for the first great internet generation of zinesters and scenesters (although it is a celebration of them). It’s a novel about a guy’s search for something that changes every time he thinks he’s identified what it is. He wants wild-ass adventure; he’s wanted that all his life, and he’s suited to it in a way that most people whose great liberation happened while they were reading a book could never be. He wants to write and be at the centre of the thrilling creative world he finds in Philadelphia. He needs love and peace too; and yet every time the dust of his bohemian life starts settling around him he says or does something that stirs it up again. “I was a fool. Kind of a dick, actually,” he says.

That’s the language that it’s written in. When the narrator is in deep reflection it flashes surreally, like a poem. But there’s no affectation; Pat's words are those of an intelligent American who hasn’t been poured through the academic mould and set hard; he writes as someone who has lived on the other side of town among the bums and the crazies and like Kerouac, actually prefers them. Not that he worships at the feet of the Beat writers either. They may have started things in America, democratising poetry and prose and setting off wave after wave of independent creative activity, but Beat worship has become as stultifying as everything else. When Pat’s narrator goes to see the Kerouac manuscript in Lowell he feels—as I’ve said on this blog—that seeing it in its unfinished form is an intrusion. The place in which it’s housed “smells of death.” Yes, indeed.

Structurally Pat mixes up the chronology of the story so that the past informs the present and the present explains the past. You see different moments in the two principle relationships he has—beginnings and endings jumble—and somehow that makes the emotional curve of all three characters more sympathetic, even when they’re doing nasty things to one another. It’s not common to read a book in which you feel a degree of empathy even for characters you know you wouldn’t like. And even less common—the criticism has substance—that a male author of the Underground/ alternative literary scene should write women well. Pat does. I’m not a woman so I can’t be the final judge; but to me Pat’s women are as sensitive and human as his men.

You can find Exit Nothing now on Amazon and you’d be well rewarded for your purchase. If you do read it—or you’ve read it already—why don’t you leave a message here and tell us what you think? I am linking to the novel at the side of this page as Suffolk Punch’s first Book of the Week