FLYING LOW: ON THE DEATH OF MARGARET THATCHER

Going through my files tonight I found a poem I wrote about the death of Margaret Thatcher. It's never been published anywhere before. 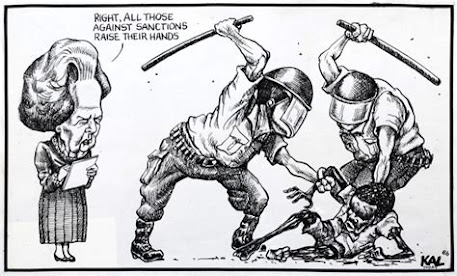 today outside the Courts

marking the death of Margaret

on whose behalf they fought.

They screwed the rainbow travellers

and gays and peace protestors

and gave my union rights away

And every time I tried to march

to show them my frustration

a copper clubbed me, and became

the hero of the nation.

The Courts of Law have always been

protectors of the rich

The small man gets a crumb sometimes

to keep him from rebelling

and then he’s taxed for harbouring

a spare room in his dwelling.

The Union flag is flying low

the hungry and the poor.

the country is in mourning

the Courts of Law should bitterly

lament their own suborning.

it hangs limp in the rain

to mark the death of Margaret

and justice just the same.