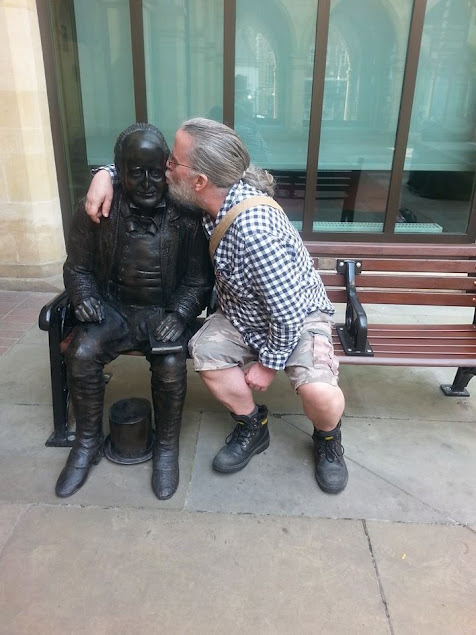 At least two great poets are associated with the county I live in, Northamptonshire. One is John Dryden, who grew up in Titchmarsh and has his figure carved into the wall of the Northampton Public Library on Abington Street. Dryden wrote the brilliantly nasty poem MacFlecknoe which was the first poem I remember really enjoying; we studied it in A Level English at Tresham College in Kettering.
The second poet is John Clare, whose reputation has waxed as Dryden's has waned. He is known as The Northamptonshire Peasant Poet, although because of administrative changes the village of his birth, Helpston, previously inside the county boundary, now falls under the City of Peterborough Unitary Authority. Clare spent 23 years - the last years of his life - at the Northampton General Lunatic Asylum, now St. Andrew's. Dr. Fenwick Skrimshore, who admitted Clare, attributed his illness to 'years of poetical prosing.' God help us all.
Clare is now celebrated as one of the great sons of Northampton. His statue sits - curiously - in the Guildhall courtyard where very few people see it except council officers on their lunchbreaks. But there is also a plaque directing tourists to All Saints Church, where Restoration King Charles II stands on the portico like a slightly effete Roman Emperor, gazing down Gold Street towards Wilko and the Salvation Army shop. Clare liked to sit outside All Saints, or so Tourist Information tell us. I have sat outside the church myself quite often trying to think myself into his world, his time, wondering exactly where he sat, this small, probably very intense, rumpled man. Even the effort of that makes you feel a sort of kinship with him.
In this generation Northampton has many poets. My personal favourite is Jimtom James, whose performs his poetry - pandemics notwithstanding - with a small band accompanying him. Jimtom's poems work equally well as spoken word pieces, and on the page, which isn't always the case with poetry. I won't attempt to describe them. I don't have the critical vocabulary, and that's not surprising: his poetical voice seems entirely original to me. How can you describe something that you've never encountered before, other than in the broadest terms? His poems are like spells. But not really. His poems are manifestos. But they're not at all. His poems are prayers. Yes, some. But not like in church. Jimtom's poems remind me best of Keats' metaphor of a pool of water (or is it a lake?). When you dive in, you don't try to understand the water, you swim.
A few years ago now, he and I went to spend some time with other John Clare enthusiasts at Clare's statue. I think it was for National Poetry Day. My wife Michelle came too. Everybody was invited to celebrate Clare by reading their favourite poem of his. Jimtom did; I didn't. I was too shy, even though the number of people there was small. But I was glad I'd attended. It occurred to me as I sat and watched that in different ways Jimtom and I were inheritors of the tradition begun by Clare, if not by the much less sympathetic and appealing Dryden. He had passed a torch to us and we were still doing the work, Jimtom most powerfully with his concern for the preservation of the natural world and our host planet.
Whether of us would have been able to bear Clare as a companion for too long, especially once he started talking about politics, is another matter entirely. Clare, by all accounts, was conservative in his outlook, although I suspect those labels might have had different shades of meaning at the time of the Industrial Revolution.
'I am as far as my politics reaches 'King and Country' – no Innovations in Religion and Government say I.' (John Clare)