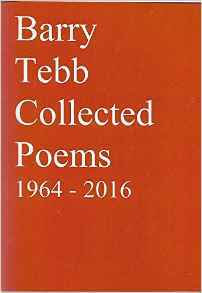 This book represents 52 years of serious work by a poet of great skill and sensibility. Barry Tebb believes in the importance of his art in an age when cynical detachment is the requisite posture for a reputation, at least in the creative alleyways where I’ve made camp (more by accident than design). Elsewhere, it’s enough just to write increasingly insipid imitations of the generation that came before you these days. Maybe the readership no longer believes in poetry as a high and possibly holy work either:


Armitage, I name you, a blackguard and a knave,


Who knows no more of poetry than McGonagall the brave,


Yet tops the list of Faber’s ‘Best Poets of Our Age’.


That’s from Barry’s poem ‘James Simmons R.I.P.’ It’s one of the great pieces in this collection, a paean to a poet largely erased from the histories because his style had become unfashionable and his personality difficult. Armitage challenges nobody; his demeanour and his poetry are radio friendly. The job of poets in the mainstream now isn’t to make the reader look up a reference or be truly and genuinely moved.


The only Simmons poem I have been able to find is about two people having sex on a train. It’s rambunctious and very funny. But Barry says of Simmons ‘You bared your soul in a most unfashionable way.’ This is something Barry’s own poetry does too (and mine, perhaps). We learn, reading from cover to cover as I have done, about his relationship with Brenda Williams, a poet of considerable gifts herself and one who, one day, absolutely must be ‘discovered’ by feminist scholars – if this doesn’t happen, there is no justice:


I remember the bungalow at Rawdon


Where we met, burning coals could never warm it,


Living there alone was like wearing a hair shirt.


I had reached the end of childhood, the part


With jelly, ludo and Rupert Bear. You came


With a friend who announced, ‘There’s no one here


The lives of these two extraordinary poets were as filled with love, sadness, tragedy, waste and beauty as all of our lives, I would imagine. But despite their problems, despite what might be called (though the term is perhaps uninformed) the failure of their marriage, Barry and Brenda remained intensely close, their lives interwoven, and when Brenda died, the poetry Barry wrote is heartbreaking and beautiful. Why such sincerity is no longer valued puzzles and annoys me. Reading his poem ‘Your Dying’ I feel my mother’s end beating hard in my chest:


You were strapped down and I strapped up, too far


To grasp your desperate hand. For once your terror was plain,


The centrepiece of these ‘Collected Poems’ is ‘Bridge Over the Aire’, an epic, 82-page, five book poem about Leeds and first love. Barry was born in Leeds, a Leeds he returns to as we all go home; but little of his Leeds remains:


My eyes wandered over the Aire at the


Coal barges as they snaked beneath the bridge


In black tarpaulin shrouds and clouds of steam


Barry Tebb ‘Bridge Over the Aire, Book One’


In crisis, perhaps, facing misfortune (‘Luck, where did I leave you?’) Barry walks the streets of his youth, those that remain, reconsidering his own choices (‘I own no property but a book’); and the past and the present accompany him wherever he goes:


With every car alarm


I hear the air raid


A bus that could not stop


Barry Tebb ‘Bridge Over the Aire, Book One’


But most of all, on Barry’s journey home, he thinks of Margaret, his first love:


Why does your image haunt me


The colour of your hair


Your voice in dreams


Barry Tebb, ‘Bridge Over the Aire, Book One’


The whole poem is haunting, filled with nostalgia and its attendant sense of desperate loss; it is also romantic, enormously so, in a way that no poet who wishes to be considered sophisticated would dare to be anymore. But those who practice a distant art, a carefully neutral or emotionally superficial art are lying to us about human experience. Life is as lovely as it is raw and terrible. In the midst of the beauty and the chaos we have poetry, which is flexible enough to glorify the magic and make at least partial sense of our despair. If it doesn’t speak to the core of our being about the things that frighten us, sadden us and ennoble us then it’s really no more important than balloon twisting at a children’s party.


We are standing on the corner of Falmouth Place


We are standing by the steps to the Aire


We are standing outside the Maypole