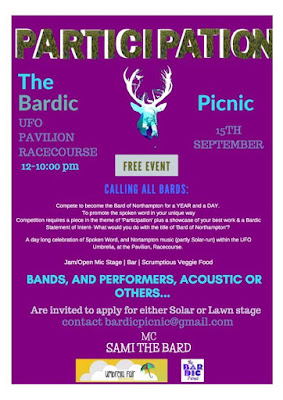 This year's Bardic Picnic takes place on Sunday 15th September, that's this coming Sunday, on the Racecourse at the Umbrella Fair Pavilion. The Racecourse is a perfect place for the artists of the area to meet and engage in friendly song, dance and poetical competition. The Bardic tradition goes back to medieval times at least. And the Racecourse has been a place of communal activity in Northampton for centuries.

Unofficial race meetings were held there until 1681, at which point they were stopped because of the number of accidents. As much as I disapprove of horse racing, I can imagine the roaring, cheering (and probably at times dangerous) atmosphere at the meetings. The sense of freedom gained by hardworking people as they watched those marvellous wild creatures charge must have been exhilarating.

Between 1778 and 1882, apparently, the area now known as the Racecourse was called Freeman's Common and local freemen grazed their cattle there. That name has resonances in the modern age even if ideas about farming and the use of animals have to change.

With the aid of Lord Spencer, the park had also been put back into service as a racecourse fifty-some years earlier, according to the histories, and races continued until 1904, when they were banned because of the number of fatal accidents involving jockeys and spectators.

What ghosts the bards and strummers and crafters will walk in the presence of on Sunday! You can sense them if you sit there alone for long enough anywhere in the park and open your mind.

For me as a poet it is the Racecourse's history as a place of public executions that resonates most strongly. Hundreds were killed there between 1715 and 1818 (and probably none of them rich).

My rhymers 'Jack the Bastard' and 'The Bastard's Return' were inspired by a gang of highwaymen who were hanged on the Racecourse. One of the Culworth gang, as they were called, left a poem when he stole from a farm. Artists and outlaws: don't they have at least a little in common when capitalism's clear mission is to flatten the human spirit and transform us all into homogeneous economic units?

Along with the annual contest to find a Northampton Bard who will hold the position for a year and a day, visitors on Sunday can expect live music from Jono & the Uke Dealers, Kenneth J Nash and Katie Paton, among many others, as well as vegetarian food and lots of stalls. It's free too, which is another great incentive to toddle along if you have nothing else to do that day.