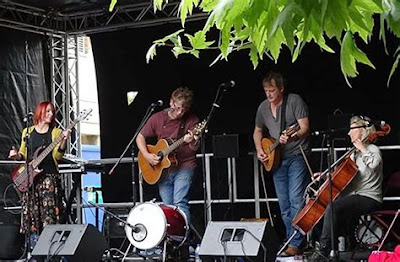 Northampton band King's Gambit have announced a Kickstarter project to raise money for a new album. They need to raise £2,500 before December 17th (I think that's the date). Can anyone help? Clink the link below to see what special rewards different pledges will get you.And know that you will be adding to the general level of beauty in the universe.

To whet your appetite, here's a poem I wrote after seeing the band one day last summer.


King’s Gambit are tuning up on stage
as we shelter, cow-like, from the lashing rain.
We’re under the tarp of a market stall,
our coats zipped up. There’s a crowd of us.
I’m grumpy. I came to watch the band,
not drown. But over Jimmy’s End,
some blue appears in the Stygian gloom.
So maybe we will have our show.
Meanwhile, a New Orleans-style jazz band
marches through the deluge playing.
The rain soaks through their clothes,
but they are smiling anyway. This moment’s theirs;
if they get pneumonia, so be it.
On stage the band are looking ready.
But still it’s raining bloody cats and dogs.
They are facing forty empty seats
and the blue patch at Jimmy’s End’s gone black.
Will they play? We wonder what will happen.
I remember Justin at the Bardic Picnic,
his strip dance when the heavens opened.
I won’t do that, but we could chant no-rain
like Woodstock hippies to end the flood.
I’m building up to suggesting it
when the clouds part inexplicably
as if two hands had separated them,
as if King’s Gambit had brought the rain
to add a little extra showmanship.
Before the band have even started playing
their folkbeat with a Shoe Town vibe,
all the seats are full, and forty bums are wet.
But one song in and all the crowd forget.
I long to jump out of my seat and dance
in front of everybody, like a dick,
but wallflowers need a lot of beer for that.
I’ve just had Sprite for breakfast.