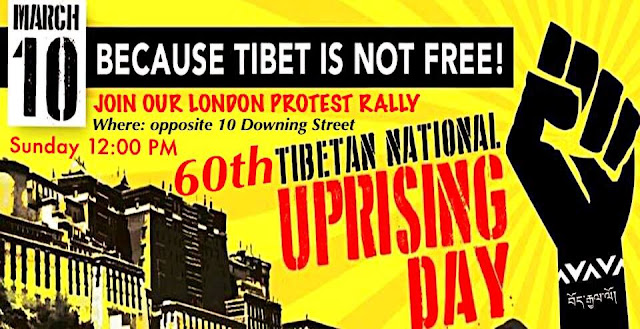 Today marks the 60th anniversary of the Tibetan National Uprising. The Parliament-in-Exile makes an official statement about the history and the current status of Tibet under occupation here.

References to the anniversary on British media, however, appear to be non-existent at the moment. Interest in the matter on the part of our political parties is equally hard to detect.

I had Sky News' Sunrise programme on in the background for an hour this morning and it didn't get a mention. I had Sophy Ridge on Sunday on for at least half an hour; most of that was taken up by an interview with Dominic Raab, in which he talked about Brexit, the 'Marxist' agenda of Labour under Corbyn and the 'good story' that the Conservative Party has to tell the electorate. He also coyly denied (looking all the time like an arrogant young murder suspect on Inspector Morse) that he had any immediate ambition to become prime minister.

I have The Andrew Marr Show on now. A newspaper review didn't talk about Tibet. Tory David Davis is being interviewed now and he has spoken only about Brexit. John McDonnell of the Labour Party is on shortly; he won't talk about Tibet either. He never has, as far as I know. (Since I wrote the first draft of this I watched his interview. Unless I missed something Andrew Marr questioned him only on Brexit and Labour's alleged problem with anti-Semitism.)

Brexit is a pressing news item, obviously. So is knife crime. So are many other issues around the world. But when the streets explode with violence in Venezuela the media gives it wall-to-wall coverage and the Right calls for intervention; supporters on the Left object. When the Palestinians clash with the Israelis the media only covers it if the violence is sufficiently large; and the Left expresses enthusiastic and unconditional support for the Palestinians.

60 years ago vast numbers of Tibetans were brutally murdered by the occupying Chinese. The anniversary reminds us that the torture and the killings continue on a daily basis in what human rights organizations consider the second most dangerous, least democratic place to live in the world.

But who, in the West, is reporting it? Who in the West with any power is committing themselves to doing anything about it?