Book Review: 'The Two of Us' by Sheila Hancock 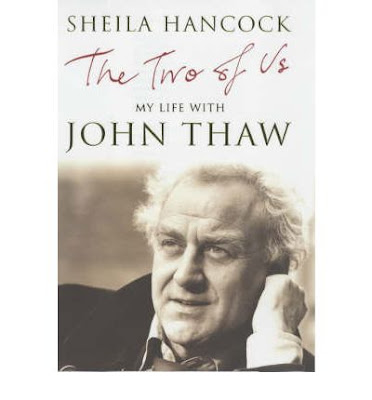 This week I've read The Two of Us. Sheila Hancock's memoir of her life with John Thaw. It was first published 15 years ago, but my love of the Inspector Morse franchise hadn't consumed me in 2004. I liked the show, just as I had liked The Sweeney when I was a teenager, but it was still just unusually intelligent tv. Television was an intellectual bete-noire for me in those days. I hated the way it was always chattering away in the background at home, forcing what I considered a mentally deadening consensual reality on its audience.

Besides,  there really was no Inspector Morse franchise in 2004. The Morse spin-off Lewis wouldn't begin for another two years, and I didn't even see that until 2010, having jettisoned my tv between house moves at some point along the line. Finally I did see it, and I thought it was wonderful, almost as good as the original (I was too loyal to allow for anything else). By the time the Morse prequel Endeavour began in 2012 I was deeply immersed in the Morse universe. Those of us who are make Star Wars fans look casual and disinterested.

The Two of Us, however, isn't about Endeavour Morse. It's not about Jack Regan either. It's about the complex, troubled man who created them both, and his twenty-eight years with Sheila Hancock, someone who all British people of a certain age will recognize even if they can't name very many things that she starred in. I remember her from her brilliant appearances on the radio show Just a Minute. More recently I have seen her in the inspirational little indie film Edie. She was in EastEnders, she writes, playing the mother of Martin Kemp, but I didn't have a tv at the time. She also appeared on tv in a number of sit-coms in the 60s and early 70s, always typecast as scatter-brained and -- from a couple of clips I've seen -- sexually flirtatious (if naively so). Her greatest work, apparently, was in the theatre.

Her book, written beautifully, looks back to their separate childhoods and the development of their careers to the point at which they met. Then we read about their lives together. Throughout, she shares extracts from her private diary, written when Thaw became ill at the start of the new century. In passages of great beauty and honest she records his slow decline and death, and the grief that paralysed her in the weeks and months that followed it. But Hancock clearly isn't the sort of woman to plead for your sympathy, or to wallow in self-pity. Slowly, painfully, with the help of friends and family, she starts to get better. Those passages, after the terrible sadness of the ones that preceded them, are joyous to read.

You probably won't want to bother with The Two of Us if you're not an admirer of either of the main players in it, and if you are, you've probably read it already. If you haven't, though, try it. And if you're a celebrity, about to hire a ghost writer to do your autobiography for you, have a look at this book first. Ghost writers rarely do a subject justice. The prose, even if it's your own speech taken from tapes and reordered, invariably comes across as flat and boring. This whole project, on the other hand, works extraordinarily well.