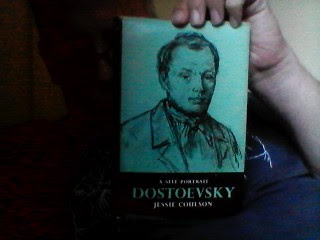 This book is a 1962 Oxford University Press edition of Dostoyevsky's letters, edited by Jessie Coulson. Michelle found it in a charity shop yesterday; it was about to be sent to Africa but the manager, knowing my predilection for old literary books, sold it to Michelle instead.

I'm glad she did. When I checked inside I found a glued-in bookplate bearing the motto 'Fortiter et Fideliter' (Bravely and Faithfully) and Ex Libris D.M. Davin. (Ex Libris meaning 'from the books of..', signifying, therefore, ownership.)

As I always do when there's a name inside a book, I did a little research online; and I'm almost certain I found this book's owner. Let me, as a fan of the Inspector Morse books and programmes, explain the reasoning behind my near-certainty before I give you the big reveal you are undoubtedly waiting for with trembling anticipation.

The book's owner had an interest in literature, whatever his or her feelings about popular fiction may have been.That's obvious. This person was a serious reader, if that word isn't too snobbish.

The book's owner had a connection to a school, college, association, press or family of some status, as the bookplate bears a coat of arms with the Latin inscription already mentioned beneath it. (I haven't located the coat of arms yet.)

The book's owner may have had a classical education. He or she at least grew up, lived or worked among educated people. I have seen older bookplates without an ex libris. I have books from 1910 and 1912 inscribed simply, and in pencil or ink.

The book's owner may have lived and worked not too far away from Northampton. Second-hand  books can travel long distances when the original owner lets them go, but a closer connection does establish probability (or at least possibility) of ownership.

None of the above, singly, or all of them together, provide cast-iron proof about who may or may not have owned a book 56 years ago, but after much googling, my belief is that the D.M. Davin who once owned the book I now own was Daniel Marcus Davin, New Zealand author, Rhodes scholar, WWII soldier and intelligence officer, fellow of Balliol College, author, literary critic and long-time employee of the Oxford University Press. 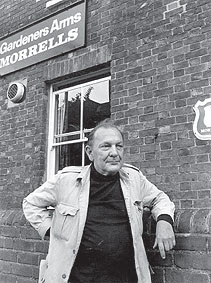 How many others are there to choose from? Well, precisely none. Google, in its infinite capacity to seek out obscure, lost and forgotten information from the dim recesses of the past, could produce only one D.M. Davin for me. And he met, and exceeded, all of the criteria I outline above.

There may be another Dan Davin out there, or a Dawn Davin, but if this beautiful OUP edition of Dostoyevsky's letters wasn't this man's, I'm a Nobel Laureate.

Davin's career as a novelist, according to different internet sources, began promisingly with 'For the Rest of Our Lives' in 1947, but failed to flower into something enduring and substantial. I don't know; I've never read the books, though I might, now a little piece of his life has come into my possession.

As a man, and an intellectual, Davin squandered his talent and his creative energy, so these sources say, on critical writing and his tendency to give too much of himself away to younger writers while holding court in his favourite Oxford pubs. especially the Gardeners Arms. The picture of Davin shows him outside the Gardeners. Am I alone in thinking he looks a little merry?

Not remembered in England, still 'cherished' in New Zealand.

Camerado, this is no book.
Who touches this touches a man.