Casting Out the Devil: Living with the Stigma of Epilepsy 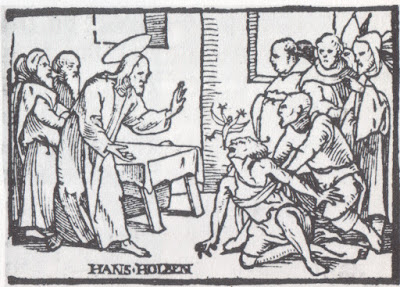 Recently I lost my job. I'd been working at House of Fraser's Wellingborough warehouse for four years. Last year we began hearing whispers about its financial problems. Then DHL lost the contract to deliver the service for House of Fraser; it was won by XPO, who, we all presumed, had promised to deliver the same service for less money. But whatever was happening in the offices over our heads didn't work. House of Fraser went into administration and was bought by Mike Ashley, owner of Sports Direct, where the abuse of workers was so infamous Ashley was called to explain himself in Parliament. (As far as I'm aware, not much changed.) Ashley, as the new boss at House of Fraser, immediately fell into a dispute with XPO, who wanted some assurance that he would make good on the millions of pounds they'd invested in automation to make the service more 'efficient'. He said he would pay them nothing; he was under no legal obligation to pay, so he wouldn't. It was war. And we, the ordinary workers, were the victims. Everybody at the warehouse employed by an agency -- the number ran into the hundreds -- was told with only a couple of days' notice not to come into work anymore. My agency promised to find us all other jobs. I expressed an interest in a certain warehouse on the outside of Northampton, my choice dictated by amenable hours and the accessibility of the place by bus. I'd had enough of the four-hour commute I'd put myself through every night for the last four years just to get to Wellingborough, only ten miles from my house. And everything seemed to be set; at a jobs fair I'd attended they said the company were desperate for new staff. I even spoke to the agency man who supervised that particular contract, asking him if he knew when I might be starting. 'I'm talking to the manager this afternoon,' he told me. 'He'll tell me what sort of volumes he needs and when, and I'll get back to you.' (People are 'volumes' now in the workplace.) That call happened six weeks ago and I've had no reply. Why? I can only guess. When the agency staff were laid off at House of Fraser, the supervisor there said our personal files would be passed directly on to the supervisor in our new workplace. And on my file there is one word that, in the years since my diagnosis, has changed everything: EPILEPSY. The same agency knew about my epilepsy at House of Fraser; but I'd already been in the job for two years when I was asked to make a health declaration by either the agency or DHL, so I lied and said I'd just been diagnosed. I knew what would happen if I didn't. I'd been treated like a pariah by employers since I started having seizures. It makes you guarded about what you say and to whom, and it cautions you always to expect the worst. The worst, after all, usually happens. But since, as far as they knew, my epilepsy was a recent discovery, they couldn't fire me because of it. That, of course, would be discrimination. Hiring someone who you know to be epileptic, of course, is quite a different matter. And you can have all the anti-discrimination laws you like, but if an employer doesn't want you because you're black, or a woman, or you have a learning difficulty, or you're in a wheelchair, or you have a long-term medical condition like I have, all they have to do is say, 'We went with someone with more experience,' and nobody can contradict them. Unless you can afford to go to court.
When I tell prospective employers I have epilepsy it's like the kiss of death. You can see the horror in their faces as they try to calculate how to respond to my disclosure without landing their company in a lot of legal trouble. One care work company actually had their lawyers on me, and insisted I give the company directors access to my medical records.And I have informed another agency in the last six weeks about my condition and despite my experience, my qualifications and my immaculate (ironic, isn't it?) sickness record, they can find nothing for me either.
Is this a coincidence? Have I become, in the last few years, mysteriously unemployable? Perhaps, but I don't think so. All of which leads me to an obvious solution. If I want work, I will just have to lie about my health as I did before to get work. But then, every company I've worked for in the last decade does random drug testing. If something you're taking is detected in your urine sample, and you haven't declared it, you will be instantly dismissed. As an epileptic I have to avoid stress. I can't be fearing, every day when I go to work, that I won't have a job before my shift is finished. I've got my seizures under control now, more or less; that kind of anxiety would put me on the floor again in hours. I can only hope that something good comes along, and while I'm waiting for that to happen, do a little retraining. Warehousing was all I could do when my epilepsy barred me from continuing in care work. Maybe if I learned how to do something else, I'll find less fear, more open-mindedness about what is, after all, a condition which many of us can have and lead perfectly normal, safe and productive lives. After being seizure-free for a certain amount of time a person is allowed to drive again; if you are considered safe behind the wheel of a car on a busy road, where could you, with any justice, be considered a danger?