George Orwell: When the Etonian Reared his Head 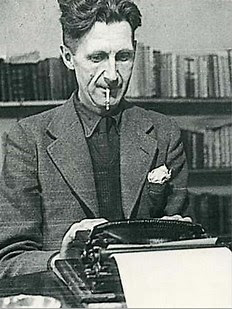 Reading Orwell's 'Down and Out in Paris and London' for the second time, I notice something I didn't see the first time around: his upper-crust Englishness. I'm no Orwell expert, but like everyone who grew up in the political Left, I have a certain sentimental view of him as a champion of the working class; as a libertarian; as an egalitarian; as someone who crusaded for the binning of the old world order.

'1984' and 'Animal Farm' certainly show us a man opposed to totalitarianism, and only a dogmatist would believe that was the province of politics in the East. But traditional English values seem to run through Orwell, at least pre-war Orwell, the way a seaside town's name runs through a stick of rock.

You can see the Old Etonian in his generalisations about race. He expresses a peculiar belief, for example, that Americans know nothing about 'good' food:

They would stuff themselves with disgusting American 'cereals', and eat marmalade at tea, and drink vermouth after dinner [...]. Perhaps it hardly matters whether such people are swindled or not.

Another pearl of wisdom is that women aren't given the job of chef in Parisian hotels because they are less able to co-ordinate the preparation and delivery of multiple simultaneous orders. The most surprising comment, however - at least for me - was this one about waiters:

[...] They work fifteen hours, seven days a week, in many cafes. They are snobs, and they find the servile nature of their work rather congenial.

Only an old Etonian, or the equivalent, could believe that. Hard work and long hours might be congenial to those who are amply rewarded, but no one who's getting paid a pittance wants to spend the best part of every day working his arse off for someone else, even if he or she does think it might be an investment in the future.

None of the above observations diminish either my enjoyment of the book or my respect for Orwell (perhaps my respect for him is diminished a bit). He was a man of his time, and in any case, I feel I know him a little better by reading them. Many offspring of the upper classes have felt compelled, in the last 200 years, to take up the cudgels on behalf of the worker.

In the current climate of the Labour Party, however - the party which lionises Orwell traditionally - I think about the comments I've quoted, and other, frankly rather racist ones that I couldn't find as I leafed back through the book, and wonder what the reaction to them would be from Labour members if he were alive today, and he posted them on Twitter. The anti-Americanism might meet with tacit approval; even Americans have had the gravest doubts about their country since the election of Donald Trump. But I suspect there'd be considerable public condemnation and expressions of regret by party members about the rest of his remarks, even if they did fall short of calling him a Blairite, which is the usual, habitual response.