Poets and Prisoners: Back Among the Dead in Northampton

on February 06, 2018
I've written about Kingsthorpe Cemetery in Northampton before. It's the graveyard in which James Joyce's daughter Lucia is buried. Near to Lucia is the grave of her friend Violet Gibson, infamous in her lifetime for attempting to assassinate Mussolini in 1926. Lucia and Violet were incarcerated in St. Andrew's Hospital in the town; whether either woman would have been diagnosed with acute mental illness in a less misogynistic age is debatable, but they both died never recovering their liberty.

I walked in the cemetery today, having a little time to spare, and while looking for Lucia's grave I found this: 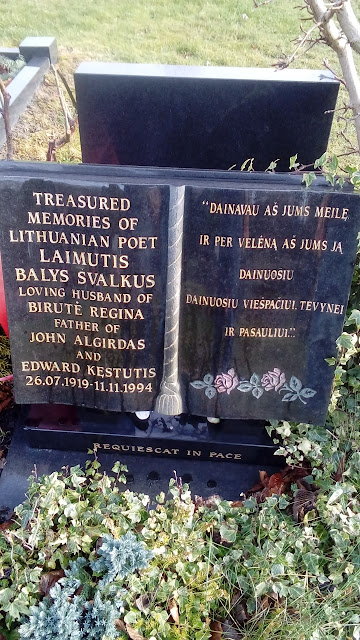 Laimutis Balys Svalkus. A Lithuanian poet. Who was he, I wondered? The book-like design of the grave and the way his trade as poet is inscribed so prominently into the marble suggest he was more than a hobbyist. That also appears to be a fragment of verse on the right side of the stone. I presume Svalkus is the author, but I don't know. The fact that there is no attribution might tell us the lines would be immediately recognisable to someone informed about Lithuanian poetry.

I did some online research about Svalkus when I got home and couldn't find anything about him written in English. Only what appears to be a list of Svalkus' published books, with their Lithuanian titles, on a very old Lithuanian web page. Amazon has none of his books either. If Suffolk Punch readers are unable to provide more information about Svalkus I'll write to the Lithuanian embassy in London. Someone will know. 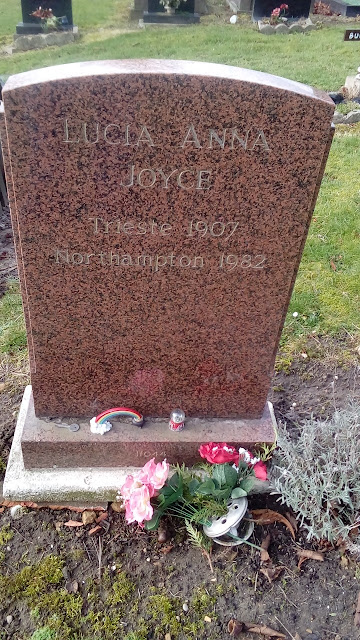 Lucia Joyce's grave is a melancholy sight. She is the daughter of the world's most famous twentieth century novelist, but the inscription on her headstone records nothing except the place and year of her birth, and the place and year of her death. There is no awkward verse, no 'she fell asleep on...' and definitely no mention of her family. People passing by the grave might think she had none.

I don't know what the reason for that is. As Tolstoy wrote, 'All happy families are alike; each unhappy family is unhappy in its own way.' But Lucia has not been forgotten. Some images of her have become iconic, and Alan Moore has called her 'the dancing heart of Northampton', meaning that her 'madness', her free bohemian spirit, far from being destroyed by her decades of imprisonment in St Andrew's, has imbued the town with its magic; Northampton is more creatively liberated, less staid and conservative, because she has been here -- albeit involuntarily.

I buried a symbolic Key of Freedom in the soil in front of Lucia's grave three years ago. Today I found that although it had worked its way up out of the soil, the key was still there. Which meant, I thought delightedly, that whoever visited the grave and took responsibility for keeping it clean might possibly understand. Somebody else had left a tiny snow globe and a miniature rainbow. A gesture of sweetness and empathy that a woman who seems to have been as mistreated as Lucia Joyce surely deserves. 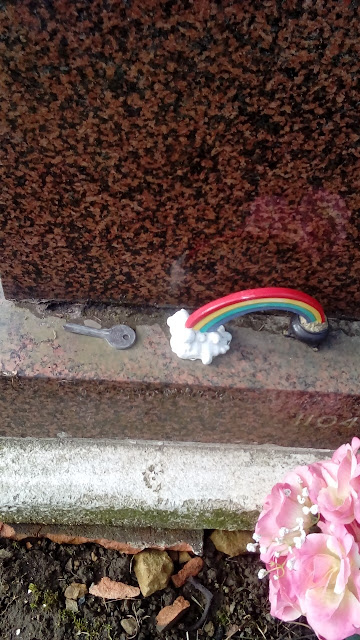