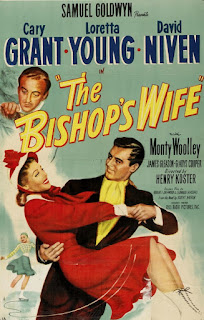 I like old movies. One of my favourite Freeview channels to dip in and out of is Talking Pictures, which rarely shows anything made after the early 1960s. Is my age causing me to retreat into a comfortable, sentimentalised idea of the past when I watch these films? Do I feel I understand the world they represent more than I get the one in which I actually live? Perhaps. But I loved them when I was younger too.

This morning I got up early. It was too dark to read without turning on the light in the living room, and if I turned on the light I would wake up our birds Wild Bill, Calamity Jane and Wyatt Earp. If I did that, everyone in our building would complain. So I turned on the tv instead of the light. What I saw when I scrolled through the viewing options was my favourite Christmas film 'The Bishop's Wife'. I hadn't seen it for at least five years, despite it having been, once, an annual seasonal ritual to watch it, and it had only started a few seconds ago. The next part of the morning was decided.

'The Bishop's Wife' was released in 1947. It's based on a novel I haven't read from 1928 by Robert Nathan, but it has a distinctly post-war feel about it. All of the central characters, from David Niven's Bishop to Monty Woolly's down-at-heel scholar are weary, lost, struggling with faith in some way. (Woolly says that when he passes the graveyard he feels as if he were 'apartment hunting'.)

Into this melancholy group, all of whom are linked by the
Bishop's wife Julia (Loretta Young), who knows that her husband has lost his way in the pursuit of his ambition, comes the charming, playful, mysterious Dudley, played by Cary Grant. He appears in answer to a prayer to God that Niven makes when he feels that he may not be able to build a magnificent cathedral because of problems he has with a wealthy benefactor. Dudley presents himself to the Bishop as an angel, one who hasn't 'earned his wings yet.'

At first the Bishop struggles to believe him, as most of us would. Once convinced, however, he enlists Dudley's support in securing the funds for the cathedral. But Dudley is distracted by an inappropriate attraction to Julia. In fact, he uses his magical powers to distract and keep the Bishop occupied so that he can woo her.

Ultimately, Dudley confesses his passion and Julia rejects him. But this is not an unhappy resolution because when the Bishop realises he may lose his wife, he rediscovers his own passion for her and declares himself ready to fight even an emissary of Heaven to save his marriage.

The cathedral is never built. Desiring to complete his mission, Dudley visits the Bishop's benefactor and enables her to confess that she has been so concerned with building a monument to her late husband because she never loved him. Her only love was a young composer who died nearly three decades earlier. She has been haunted by his memory ever since. When the Bishop arrives he finds her utterly changed by her confession, and determined to give her fortune to people in need around the world.

As Dudley has said at another point in the film, it would have seemed a great pity to build such an enormous roof when the money could have been spent building so many smaller ones.

A message as apparently radical, but actually entirely logical and humane, made sense only two years after a conflict that nearly destroyed the world. But in two or three years, as McCarthyism began to sweep through Hollywood like a California wildfire, such sentiments would have been unconscionable. Political fashions come and go, thankfully, and great art lives on past its creators and detractors.

To quote David Niven in the film, watching 'The Bishop's Wife' gave me 'an inexplicable feeling of happiness' all day. We all need a restoration of our faith sometimes, whether we are Christians, Buddhists, hallucinating mystics or we believe in nothing but football. 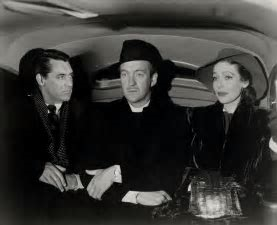