The American Resistance: My Heroes of 2017 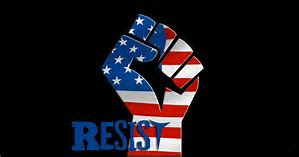 2017 will be known in history as the Year of Trump. Across the world. The 2016 election of this man, about whom, for me, almost no pejorative is adequate, has sent shock waves -- as well as peals of derisive laughter -- around the world. Surely, we all thought, almost everybody in every country on Earth, America can't be serious. Let's be fair: most of America isn't, and it never was. Not about him. But he got in anyway.

For me, however, the last year hasn't been about Trump. Or, he isn't the lasting memory I choose to take from the year, even though I've spent more than my fair share of it watching the news, wondering when he or his deranged mirror-image in North Korea were going to hurl us all into nuclear war; looking on in exasperation and growing outrage as he sought to delegitimise the media, wrote bigoted executive orders against Muslims, Native Americans and transgender soldiers, did nothing in response to the latest mass shootings except invoke the name of God and invite the NRA to the White House on the anniversary of Sandy Hook. This supposed leader of the free world even retweeted three unverified videos (including one proven to be fake) from my own country's British National Party, an organisation of hooligans in whose name a Labour MP was murdered.

What I choose to take from a year preoccupied with a president who, far from making America great again, who far from restoring respect for America internationally (he craves respect like the stereotype of a Mafia boss), has made his country look bellicose, uncooperative and fifty years behind the global political agenda -- what I take from the year Trump's seemingly ugly heart has dominated, is the rise of an American Resistance which we haven't seen the like of for decades. It makes me feel hope that the Trump victory was an historical aberration which will soon be corrected. And the fact that the Resistance is as much a populist movement as it is a mainstream political movement -- from this distance it seems more about the people on the streets, although there are still good men and women in Washington -- makes it all the more inspiring. I have been loosely involved with grassroots campaigns against government for decades. But most of the times it's hard to get more than twenty people to a rally.

The Resistance isn't one thing; it's a lot of things. Women have found a powerful voice in campaigns against sexual abuse popularised by activist celebrities like Alyssa Milano and Rose McGowan; the discourse is often controversial and divisive, but shouldn't it be? The man running the country is on tape boasting that he can 'grab [women] by the pussy' because he's famous. In Britain, which is far from a perfect democracy, that recording would have ended Trump's political career the moment it was released. We hear of arguments between activist women, and some insist they stop and present a united front. But they overlook that the inevitable consequence of finding your voice is the freedom to use it any way you fucking like. Live with it.

The 'Take a Knee' protests begun by NFL star Colin Kaepernick incensed Trump so much he tweeted and ranted publically about it for weeks. Obama, previously, had told a serviceman in a television studio that Kaepernick was exercising his constitutional right to protest against the treatment of black people in America; Trump told an audience of his own supporters that any NFL player who took a knee during the national anthem was a sonofabitch and he should be fired.

There were clear racist overtones in his comments that anybody who cared to see would see. Trump's racism, however, is not news. After a white supremacist rally resulted in the death of a young woman  protesting their odious presence in Charlottesville, Trump said there was blame on both sides for the fighting and insisted there were good people among the white supremacists. He didn't characterise them that way, of course, but he wouldn't, would he? No politician of even marginal intelligence will use derogatory language about his constituents, however accurate it is.

Trump and the American police force, according to the testimonies I've read and heard, take more credit even than those bold NFL players for imbuing many young Americans with a fierce determination to stop the brutality that makes a black man fair game if he's out on the streets after dark. The President told the cops that he supported them being much harder on the people they arrested. His comments were contradicted the next day by senior and beat officers, but the statistics speak for themselves. Too many young men become known to the world because they died in their car with a bullet in their chest.

Some people I know reject the idea that negative racial profiling is behind the killings and chokings. I think that's naïve and in itself kind of racist. But even if they are right, which seems unlikely, American police officers wouldn't be so jumpy if the country brought its gun laws in line with those of the rest of the Western world. That's not going to happen in this administration, of course, because Trump and the Republican Party are puppets of the NRA. I detect, in my reading, that there may be a grassroots gun control movement slowly growing in America though, as part of this Resistance which has flowered in 2017 on so many fronts. Let's hope that it gathers momentum and some real, positive change occurs. One wealthy lobby group shouldn't hold the safety of all Americans in its hands, any more than one bloated businessman who bought an election by lying to vulnerable people and stealing from almost everyone should be responsible for the fate of the whole world.

The American Resistance exists on other fronts, but I've run out of time to discuss them all today. The women and men taking part in it, and the ones who have died supporting it, are my heroes of 2017. I was almost grief-stricken when the country that gave me most of the books and music I love, and most of the movies I love, and some of the ideals I cherish, elected to its highest office a man I've considered a vainglorious fool for thirty years; but the Resistance showed me that America was the country I presumed all along. And now we British onlookers can organise our calendars to welcome Mr. Trump to London in 2018. It should be quite a party.
Alyssa Milano Colin Kaepernick Donald Trump Rose McGowan The Resistance