Rohatsu Is Coming, Bard Rolls Out The Mat 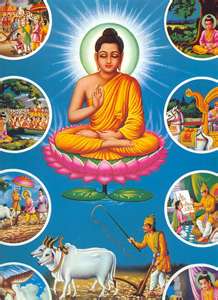 We Boodhists are fast approaching our favourite day in December, which is called Rohatsu. Rohatsu falls on December the 8th, and since the word itself, in Japanese, means "eighth day of the twelfth month" (at least according to About Buddhism) that would make sense. December 8 is the day Japanese Buddhists observe the enlightenment of the Buddha of our aeon, although of course, there have been countless Buddhas in past aeons, and I suppose there will be countless Buddhas in the future.

In Zen monasteries, Rohatsu is the last day of a week-long sesshin, which is to say an intensive meditation retreat in which monks focus on their meditation practise at every moment of the day as a means of redoubling their dedication to the search for Enlightenment. This, after all, was the historical moment when Buddha himself entered into the final stages of his search, confronted Mara and freed himself from cyclical existence.

I try to observe a mini Rohatsu week every year at the Bard Gaff. I'm not attached to a monastery or a teacher,but even if it doesn't help I figure it won't hurt. And my Buddhist practise has wavered quite a bit recently, so a refocusing on the path is probably well overdue. All summer I read the sutras, meditated daily for long periods and felt a real sense of peace with the world. But since I came down from the mountain at the end of September and started dealing with people again I've been so full of hate and confusion I'm almost enjoying it.

On December 8th, I realised last night - the day Buddha became enlightened, remember - I'll be at University for 8 hours hearing about Ezra Pound, Jane Austen and Shakespeare. I will have to get up early to hit the meditation cushion and then try manfully to approach those hours with a sense of appreciation. If Buddha could put the hard work in I'm sure I can.

Or can I? Sometimes I think I have fifty lives to go before I'm ready even to think seriously about jumping off this crazy Wheel.