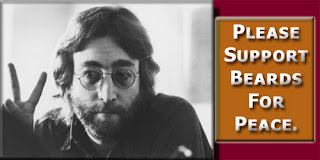 That's right. It's the new peace campaign that every man wants to be a part of! Wish you could do something about the disaster in Iraq? Want to keep the pressure up on the Bush and Blair governments to bring our troops home? Grow a beard! It's a symbolic gesture to show your individualism, your independence, and your brotherhood with the innocent Muslims being slaughtered in the streets of Iraq every day. (No, it's not British and U.S. troops doing most of the killing, not now, but it's a situation we created and then failed to control; and even the British Army has admitted that our presence there "exacerbates security problems," or whatever the phrase was.)
The anti-war/ anti-Occupation lobby has made huge progress on both sides of the Atlantic--maybe more in America than here. But if we turn the heat down on our respective governments now the Occupation could go on for years, and how many more Iraqis--how many more British and American troops for that matter--will have to die if that happens?
So grow a beard. It's such an unacceptable, anti-social gesture in this prim, manicured, puritanical age, the bush sprouting on your chin is bound to provoke discussion. And when it does you can fire off a lecture about Western imperialism and the murder of the innocents in the Middle East. You may get punched, you may lose your friends, you may wind up being investigated by over-zealous security agents who mistakenly believe that wanting your nation to be a nation of peace is unpatriotic, but at the very least you'll save a small fortune in razors.
Go to www.myspace.com/beardsforpeace to find out more about the campaign.