BOOKS: I Greet You at the Beginning of a Great Career 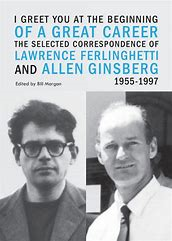 In amongst the other activities that have kept me from this blog for a while, I've been reading 'I Greet You at the Beginning of a Great Career: The Selected Correspondence of Lawrence Ferlinghetti and Allen Ginsberg' (City Lights). This book was published in 2015, but I've been waiting for it to come down in price before I bought it.

I found Ginsberg's correspondence with Gary Snyder, published a few years earlier, curiously uninteresting given that I love both poets. But this book really sings. Ferlinghetti, after all, was the man whose head was on the block for putting out Howl and Other Poems. We get his first-hand account of the Howl trial in these pages, and it creates a palpable sense of how thrilling and frightening it must have been.

Unexpected, for me, was Ferlinghetti's insecurity about his own craft. I'd always taken him, no questions asked, to be a great, quirky, eccentric poet. I thought everybody felt the same. But the other writers in his orbit put him down and more than once he asks Ginsberg for reassurance about his work. Allen, in his replies, is more than a little perfunctory, and condescending too, offering suggestions for edits that actually don't improve the poems at all.

One area in which Ferlinghetti isn't insecure, however, is in his own intellectual judgement. He yields to Ginsberg's pressure about publishing Antler, but refuses to concede that Antler is the genius Allen insists he is. And about Chogyam Trungpa, who I have always considered a charlatan, Lawrence is openly scornful:

Ginsberg resented the suggestion, made by a biographer at the time, that his poetry was better before he became involved with Chogyam Trungpa. To whatever extent it did decline, I'd say the reasons were far too complex to be laid at the shiny shoes of one alcoholic phony dharma lion in a business suit. Allen had had a history since Columbia of defending the indefensible and seeing genius in the behaviour of his friends where other people saw only selfishness, crudity and mental illness.