The Wizard and the Boy 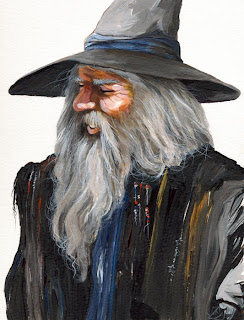 I was in the queue at my local Co-Op yesterday (buying a lottery ticket, phone credit and a bar of chocolate, if anyone's interested), and in front of me were a woman and a boy. I presume he was her son. The boy was probably five, six years old. And I noticed he was staring at me, utterly transfixed, to the point where I became not only embarrassed but also angry at his mother for not reminding him of his manners.

Anyway, he'd been staring at me "for what seemed like an age" (as writers say), when his mother did the worst thing she could possibly have done. She left the boy there to go and fetch something she'd forgotten from the other end of the shop.

The boy continued staring. I wanted to knock him down. But since I couldn't do that, I stared back. This went on for several moments and then the boy relented, curling his lips back over his missing teeth in a nervous smile. Just then his mother returned.

The boy thought about this for a while. "What's your name?" he asked, a little tangentially I thought.

I was even more embarrassed now. Here I was, a complete stranger, having a conversation with an infant boy in a line in the Co-Op.

Again the boy gave the question some thought. Then he turned away from me without speaking. His mother shoved him in the back.

"The man arksed you a question," she said.

"What did you say?" the boy arksed me.

Another pause for consideration. He was a reflective boy. "Tyrrell," he said.

The shop assistant shouted, "Next please!" then and they moved away from me to make their purchases. I noticed Tyrrell immediately falling into a conversation with a tall young man at the next register. He told his mum that the man had bought gum and could he have some.

"No you can't!" said his mum. And groceries bought and packed, she hustled him out of the shop.

I've always been jealous of other people's ability to talk to kids. It requires a lack of self-consciousness to be able to relate to someone of Tyrrell's age, and I don't have it. When he was staring at me, I felt exactly as I would have done if I'd been five myself and he, the tough boy in my class at school. That's why I wanted to make him cry.

When I think about it for a moment, though, what must I have looked like to him? A five year old has no sense of time. There are grown-ups, which are his parents and people like them, and there are old people. To Tyrrell I was old, and not only old, but probably strange too. Had he come across men with long hair before? and thick white beards?

I bet he thought I was a wizard from one of the dvds he got to watch on Sunday mornings when his mum had headaches.

Old possessor of the magic arts, queueing in the Co-Op with a big Dairy Milk and a lottery ticket.