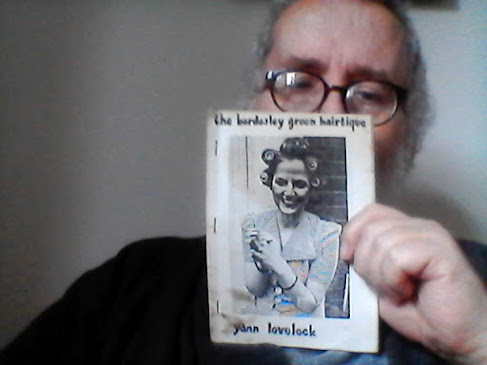 Bryn Fortey sent me Yann Lovelock's 'The Bordesley Green Hairtique' (X Press, 1980). It's a fantastic little treasure from the pre-internet age: photocopied pictures front and back, stapled, with typed and copied poems inside. For me there's nothing as evocative as a page of typewritten text, especially when you can see letters put down in error and then typed over as you can here. In those days you had to underline a word to give it emphasis as well; italics weren't an option on the typer. You couldn't avoid the occasional disappearance of half a letter either, or a whole word appearing as if you had deliberately made it bold (which wasn't an option, at least as far as I remember). The ribbon was your master before computers swept that age away.
But what about the book itself? The poems inside are mostly prose poems, a medium I've never even tried because the idea seems too daunting. I'm not a critic, so I won't attempt an analysis, especially not on one reading of the book. But the solid observations of the phenomenal (if not the 'real' world) are immensely pleasing:
The girl in blue denim sitting cross-legged at the corner of Sandford Road is so absorbed the rest of us are abashed as she combs her hair.
('South by West')
I also really appreciate the more abstract and philosophical musings that are prompted by the acuteness of his eye:
Somewhere within me there persists a fragment of the Great Pyramid. They say every man must swallow a speck of dirt before he dies.
('Devaluation')
Yann Lovelock was either forty or approaching forty when he wrote this book of poems. I don't know how much success it had at the time, but since success and failure often wear each other's clothes and most people (perhaps me included) wouldn't recognise a good poem from a hole in the ground, the reception a poetry collection gets doesn't really matter.
When I researched Yann this morning - finding to my delight that he is still alive - I did notice that 'Bordesley Green' isn't mentioned in any of the bibliographies. It should be.