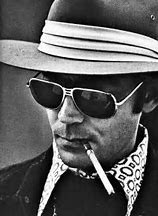 Yesterday was the anniversary of the suicide of Hunter S. Thompson, who has been one of my favourite writers since I first came across his work in Rolling Stone in 1985. I remember the magazine and the year with an unusual (for me) accuracy because the article, a ten-year-old account of the fall of Saigon, made the sort of impression on me that readers only experience once or twice in their lifetime. His prose was remarkable. He used song lyrics as epigraphs. He slipped occasionally into bizarre flights of fancy. And behind all the showmanship there was an intellectual and philosophical depth I had only expected, up to that point, from poets and folk singers.

After that first article I read both Fear and Loathing books and The Great Shark Hunt. Shark Hunt collected then-contemporary as well as much older journalism by Hunter. It was a proper history of the previous twenty years in America from a perspective that became increasingly skewed as the author grew into his mature style. And that style, though it had evolved in very different cultural conditions, seemed a perfect response to the humourless, cruel, repressive social atmosphere of the 1980s.

Through his fantastic success, of course, and aided unwittingly by a newspaper strip which parodied him, Hunter created a public image which eclipsed his great talent as a writer. The public thought of him as a drug-addled maniac, celebrating him because he did everything they lacked the courage to do. I was guilty of that myself, to some extent. And to a large extent, the public image of Hunter was true; he even played up to it. In the end, however, he became a prisoner of it, like a master magician who does the same conjuring trick night after night because it pleases the crowd but forgets, eventually, how to do anything else.

One article about Hunter after he died was titled The Day the Fun Stopped. It was fun. And it has been much less fun ever since -- I sometimes watch Donald Trump on television and imagine the savaging he would have had from Hunter with such sadistic pleasure, it makes me sad all over again that Thompson has gone. Yes, it was fun when he was here. Probably the most fun a writer has ever given us. But it was so much more than that too. Hunter, to my mind, was a genuinely great writer until he burned himself out. Maybe one day we'll look through the fog of the years with enough clarity for a lot more people to see that.