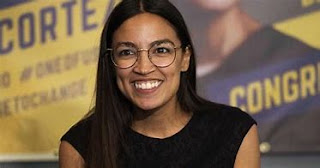 It's been hard to feel hopeful about American politics for a long time. Well, two years at least. But Alexandria Ocasio-Cortez, along with a handful of others who emerged during the mid-term elections, makes hope possible again.

Who is she? I didn't have a clue until just after her Democratic primary victory in June. Then I saw this engaging young woman on Stephen Colbert's show, I think it was, who according to the interview had caused the biggest electoral upset in decades. She was 29, or actually 28 then, and she called herself a socialist.

I knew that two years of septuagenarian Republican misrule in the White House had got America in the mood for a change. I also knew that Bernie Sanders had almost won the 2016 nomination, and stirred young American voters into a genuine semi-radical fervour, while campaigning under the socialist banner. But I wasn't expecting anybody else to get away with it.

Ocasio-Cortez was the real socialist deal as well. Joe Crowley, who she challenged in the primary, spent $3.4 on his campaign. Ocasio-Cortez spent $194,000 and nearly 75% of her donations were small contributions from individual voters. Less than 1% of Crowley's were. She won.

This approach to the funding of political campaigns, of course, dramatically reduces the opportunity for corruption by denying lobby groups access to the people in power. How different would America have been, I wonder, in the last two years if the NRA hadn't given hundreds of thousands of dollars to members of the Republican Party?

I knew that if we were going to win, the way that progressives win on an unapologetic message is by expanding the electorate. That's the only way that we can win strategically. It's not by rushing to the center. It's not by trying to win spending all of our energy winning over those who have other opinions. It's by expanding the electorate, speaking to those that feel disenchanted, dejected, cynical about our politics, and letting them know that we're fighting for them - Alexandria Ocasio-Cortez

In the November mid-terms Ocasio-Cortez faced Republican nominee Anthony Pappas, an economics professor at St. John's University, and won a seat in Congress with 78% of the vote. Pappas didn't vigorously contest the seat because Democrats outnumber Republicans by six to one in the district. But her win was still resounding.

Since her election Ocasio-Cortez' already-high media profile has gone stratospheric, partly because of her brave, principled, intelligent campaigning on a number of progressive issues (healthcare and the environment in particular); her visibility, for a politician still very new to the game, also trumps (if you'll pardon the word) everybody else's because of her skilled use of Twitter and Instagram. If recent Washington committees are anything to go by, Ocasio-Cortez may be one of the few people holding political office who knows what to do with a mobile phone. It's a shame she joins the President in that woefully exclusive club.

Predictably when an unapologetically clever young woman with good ideas emerges there is tremendous hostility. The conservative media and the more vituperative element of the Republican Party hate Ocasio-Cortez. They heap so much abuse on her you'd think she had declared herself a candidate for 2020. And that fear may be lurking in the back of their fetid minds: 2020 might be too early, but what about 2024? All the Democrats really need is a star to drive a truck through the discredited policies and personalities of their Republican rivals.

It comes down to misogyny, though, basically, doesn't it? Isn't that why commentators who defend a president with no rhetorical ability at all and a desperate need for a proof reader mock her intelligence? A woman isn't supposed to be as smart as she is. And if she is smart she's supposed to put her smarts in the service of maintaining the patriarchal system that views smart women with hostility and suspicion. She's meant to help prop up the unjust oppressive capitalism that still pays women less than men and doesn't want people like her in the boardroom. Which, if you think about it, wouldn't be very smart of Ocasio-Cortez at all.

Long may she put a chill up their spines, I say. 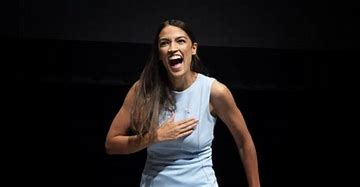