The Winter of Discontent: Rubbish Piled Up in the Mind. 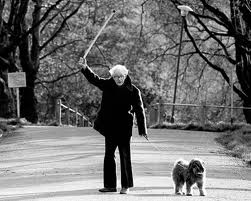 In keeping with my current political mood - which seems to have been provoked by the appalling spectacle of Mr. Cleggeron in white shirt, tieless, with sleeves rolled up (have we really reached such an idiotic and transparent low in political propagandising?) walking around a hospital ward "listening" to nurses and patients - I watched an old documentary about one of my heroes Michael Foot this morning. In doing so I discovered something I'd forgotten long ago: those "memories" anti-Labourites and lazy political agnostics who don't want their consciences pricked or their inactivity disturbed haul out every time you talk about the years immediately before Thatcher - the ones about "rubbish piling up in the streets" and "bodies not being buried" because of the strikes - were actually grossly irresponsible sensationalist headlines from a Tory Party Political Broadcast! I'm sure it happened in a few places - it wasn't just the businessmen who had genuine grievances in those difficult times - but how fascinating it is, and how frightening, that something the majority of people would have experienced on television has become part of our collective memory. Although half of the people who regurgitate the cliches are too young to have been doing anything other than colouring in outlines of Disney characters in big floppy books at the groaning end of the Seventies.