Pick Up The Tempo 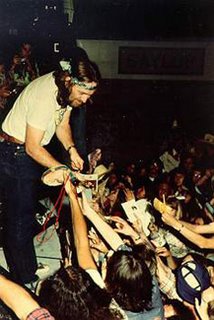 Ah! There's a world of forgotten brilliance in these 3 cds! They're reissues of albums Willie released in 1973/ '74 just as he was transforming himself into the artist we know today. Cutting loose from Nashville, growing a beard and long hair, creating a style and a sound that would get rednecks and hippies into the same concert halls at a time when American society was polarised enough to make that kind of thinking revolutionary.

So why are these albums so brilliant? Maybe you have to know where country music was, or where Willie was. Maybe you have to know where the world was. Or maybe you just need to have a certain sort of mind. But across the three albums--Phases & Stages, Shotgun Willie and Live at the Texas Opry House--you get an attitude that is simultaneously rock and country, hip and redneck, cosmopolitan and out of the deep woods, with spins on country tradition that extend the scope of the music while showing it deep (and deserved) respect--if rock has much that is better than Bob Wills or Hank Williams or the Carters, after all, then it's been hiding its jewels from me. You also get fabulous musicianship, which has been the hallmark of every Willie Nelson album I know, with virtuouso performances from Bobbie Nelson (of course), legendary fiddler Johnny Gimble, Mickey Raphael, Paul English--FAMILY, in other words, Willie's studio and road band for the last thirty plus years. When Bobbie Nelson plays, it's like listening to a concert pianist after hours fooling around in a late-night bar over a few Southern Comforts. Technical intelligence combined with great wit and soul.

I paid nearly seventeen pounds for the box set on a freezing cold morning in Northampton while I was kicking my heels between shifts at work, with not enough time to go home and feeling dreadfully dragged down by the ugly necessities of life: I had to do something to help me relax and remember that not everything was about being in the places you don't want to be, in the company of people you didn't want to see, fulfilling tasks you had no interest in. After I'd bought the set, just having Willie Nelson in my pocket made me feel that somewhere there might be some freedom to be won. And that might be one of the reasons why so many other people still buy every new release by Willie, 33 years after the first of those collected here came out. We need somebody to show us the way out of the conformist hell we're in, and nobody exemplifies the spirit of creative and intellectual freedom more than he does.

But that, as they say, is by the by. This , regardless of what it means in the broader view, is a magical collection if you like drink and hierba buena and the sound of instruments with holes in...if you understand that America and George W. Bush are two different things. Buy it, or borrow and burn it (sorry Willie), and take a trip back to the moment when a true giant of American music finally found his path, after twenty years of trying. A phantasmagoria of opportunities is bursting out in front of him. You can almost sense Willie's amusement, his relief, that he has found the way at last. His new and boundless confidence gives the music a muscle that even his own would never quite have again.

photo of Willie in the Seventies courtesy of Willie Nelson dot com.
reviews