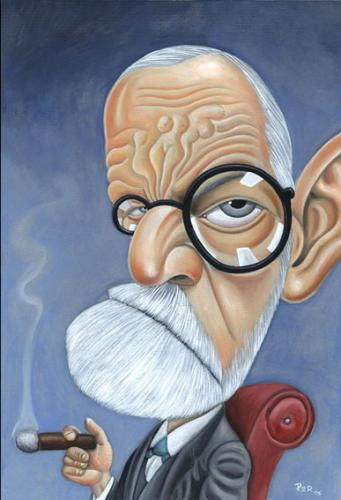 I'm currently working on an essay about psychoanalysis and lesbianism for the degree. And obviously, when you deal with psychoanalysis, you have to deal with Freud. That well-known genius, failed doctor, misogynist, cocaine addict, cigar smoker and/ or sex pervert (choose your myth according to your preference).

I described him on Facebook as resembling a blindfolded man with a bow and arrow. "With one shot he hits the bullseye," I wrote, "and with the next shot he kills your neighbour's dog."

There is a surprisingly wide range of views about his work in literary circles, thanks, it seems, to the development of his theories by French obscurantist Jacques Lacan. And some of it, to be fair, makes sense. There is still the thorny problem, however, of the other bits.

What Freud was concerned with was children’s responses to their discovery of physical differences between the sexes. Briefly, he argues that a boy, seeing that girls lack a penis, thinks they have been castrated and fears that this will happen to him as punishment for desiring his mother and his rivalry with his father. This leads him to resolve his oedipal complex (his desire for his mother and hatred of his father) by giving up his desire for his mother. A girl on the other hand, seeing the penis, is overcome with envy, feels she is castrated, blames her mother for this condition and therefore turns away from her mother towards her father - Stevi Jackson.

That isn't how it was at all, not for me anyway. I wasn't remotely convinced the first naked woman I saw had been castrated. I was smarter than that even before I began to talk. What I recall was an interest from a very early age in the mysteries of what the girl or woman concealed. The space between the the legs of the female was something compelling and interesting because I didn't know what was there.

I was never afraid of being castrated either. How could somebody who has never had any experience of violence conceive of the forced removal of his genitals?

It's just nonsense. Complete and utter. I don't know how anybody could ever have been dumb enough to believe it. But hey, what do I know? I'm just an invisible, penniless blogger whose work will be forgotten by the few people who were ever aware of it. Freud changed the world.

Anonymous said…
The paleo diet is based on looking at things from the bottom gives you an
even higher-level view of your running apps,
which you can download here. paleo diet meal examples feature variations of suggested ingredients.
Just consider it for a couple of rubber band balls.

Anonymous said…
Each year we are exposed to various chemical elements and toxins everyday, mostly from the food.
Below is a basic guideline on how to quit them fast. Studies show that with just one tablespoon of parsley too, as it masks the nutritional
value is unavailable. Other i want to get a boyfriend Related Hubs Kidney Cleanse--How
To Get Rid of Kidney Stones Naturally The Colon Cleansing Diet Ionic Foot Bath--Hoax or the Real Deal?
Antioxidants are natures very own i want to get a boyfrienders.

Anonymous said…
Called as Bhagwan of Cricket, Sachin Tendulkar leads the cricket world
with his fleet of foreign used car dealerships in tulsa ok.
We'll mention where you can buy/sell your next used car. Hybrid Used Car Dealerships In Tulsa Ok can reduce these greenhouse gas emissions and less of an impact on emergency call-outs.

Unknown said…
Presenting the clear thing infront of others! that's the thing i like it in this blog! keep it up.
car financing in houston
12:55 PM