Review: Once Upon a Nervous Breakdown 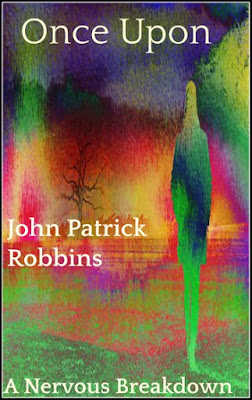 
ONCE UPON A NERVOUS BREAKDOWN is a new book of poetry by John Patrick Robbins, boss of Whiskey City Press. It's a strong book. Occasionally it's an outrageous book (for all the right reasons), linked, if not sequentially, then thematically:

What would I write about if not for women and whisky?

Who the fuck knows but I doubt you would be reading my work.

And it's an interesting quote, the one above, from somebody who founded a poetry site dedicated to 'all things bar-room.' Is John Robbins admitting he's just an entertainer giving the audience what he thinks they want?

No. But he's partly right about reader expectations. Some poets (and poets are the main readers of poetry) think that 'women and whisky' are the sole indicators of truth and authenticity, forgetting that to a lonely care assistant four walls and nights in with tea and beans on toast might be authentic.

There are at least three different voices in these poems. One is deeply, and credibly, cynical:

[…] large gatherings only seem to serve up victims to mass shootings.

Some poems push the boundaries of good taste so far, you might even feel a little guilty for laughing when you read them:

Of course, I won't even go into that night I pissed in a friend’s fish tank.


I believe I may have what some would describe as a drinking problem.
('Snub Nose')
That deliberately jejune humour is the hallmark of one of Robbins' other magazines 'Under The Bleachers'. It offends some and delights others and the magazine ploughs on regardless. But here it has an intent as serious as the poems that drip with cynicism.
What's the intent? To be heard, I think, without being seen, or exposed:
"The page is all I got sweetheart."
('And So It Was The End.')
I detect a fragile and deeply hurt man at the heart of these poems hiding his pain behind masks. He seems to reveal himself more than once and when he does, the effect is pronounced:
I broke my soul somewhere along this journey.
('Mixed Signals')
I contemplated suicide but you seemed more appealing than a fast ticket out.
('To My Best Gal')
But just when I think I've nailed him, through this book, I remember that Robbins is known to his friends as Coyote. Who's Coyote? The anthropomorphic trickster hero of Native American mythology.
Have I been tricked? Is the fragile man I see another mask? Perhaps; perhaps not. Only John Robbins really knows that. And I have a hunch he won't be telling us any time soon. As he says in the final poem I quote for this review:
Always keep them guessing.
('Disappearing Act')

Anonymous said…
A review well written by a writer well read. You honor us all.
7:14 PM