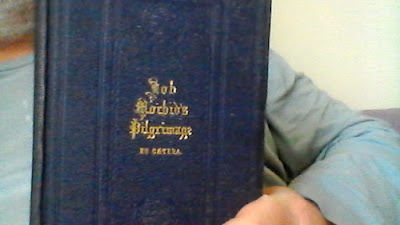 While book hunting the other day I found this little treasure. It's 'Job Morbid's Pilgrimage', a collection of poetry from 1857, a first edition if I'm not mistaken, by a poet who calls himself or herself 'D.R.M.' Now, I have a reasonable knowledge of English literature. But I'd never heard of a D.R.M. before. I was, naturally, intrigued.

I bought the book and when I got home, looked up D.R.M. on the internet. Perhaps I don't know where to look, but I found nothing. Only multiple copies of 'Job Morbid' on different Amazon sites around the world, some listing the author as D.R.M., some listing him/ her as R.M.D., and one that said 'author unknown'. Unfortunately, none of them have Amazon's 'Look Inside' facility. If they did I might be able to satisfy my curiosity by reading some work of diligent scholarship in an introduction.

A Twitter friend consulted the Bodleian digital library for me and found another book by the same author called 'Ephemeral Effusions'. The physical copy was admitted to the Bodleian in 1928. It was published privately in 1856, a year before 'Job Morbid'. I've read most of that now, seeing if I can find any clues about the identity of D.R.M., and I've begun to create a tentative picture of this lost--and it must be said, perfectly good--poet. It could be a wildly inaccurate picture, but I have no scholarly reputation to endanger by posting it here.

D.R.M. was either a public figure concerned about his reputation, or a woman. I'm inclined to believe it's the latter. She went to school in Henley, but her family was from Devon. One poem is 'Addressed to the High Sheriff of Devon for the Year 1845'. That was Edward Simcoe Drewe, of the Drewe family of Broadhembury, long-term residents of the Grange. 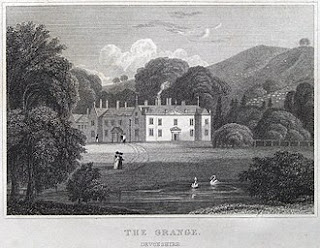 D.R.M describes herself, in the poem, as 'a humble scion of that house'. But she is not Edward Simcoe Drewe's daughter. She says, 'My father! oh! blest spirit now at rest,' before going on to praise Edward Simcoe's generosity and charity, saying he 'worthily supports the name he bears.' Might the D. in D.R.M. have been inverted? The need for that in a privately published book containing a poem so easy to decode is questionable. But still. Perhaps she hoped to use the book to help her find a publisher in London, in which case discretion would have been appropriate, given the restrictions placed on women then. A year later, she did find a publisher. I am tempted to read something salacious into her description of herself as 'humble', a possibility which would make my inversion theory even more applicable, but that's probably going too far

Where does D.R.M. stand in the family genealogy? Since I have no birth date for her, this is harder to pin down. Is she in her forties or fifties at mid-century? If she is, she might be the daughter of John Rose Drewe and Dorothy Bidgood. They are described, bizarrely, on genealogy sites as having left 'no male children.' Might there, then, have been a daughter? And might that explain the middle 'R' in her pen name? Is it possible I'm wildly off target and none of these suppositions are even close to the truth?