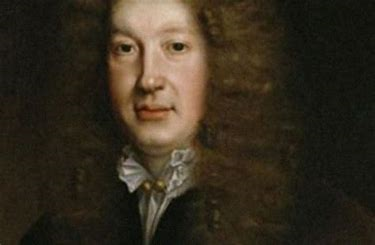 Michelle noticed John Dryden carved in stone on the front of Northampton Public Library a few days ago. Neither of us had ever noticed it before, but it turns out that Dryden was born in our fair county, in the miniscule village of Aldwincle. As far as I'm aware he's the only Northamptonshire poet to become Poet Laureate, not that that is an accolade most of us would seek.

Reading Dryden's history I remembered how I first came across him. It was in my English A Level class at Tresham College in Kettering. The year would have been 1981 or '82. Dryden's 'Absalom and Achitophel' was one of the set texts. I have learned, subsequently, that the poem is considered very important; I, however, couldn't follow it, and consequently I was tremendously bored by it.

All human things are subject to decay,
And, when Fate summons, monarchs must obey:
This Flecknoe found, who, like Augustus, young
Was call'd to empire, and had govern'd long:
In prose and verse, was own'd, without dispute
Through all the realms of Non-sense, absolute.

These are the six lines that open the poem, which is a sustained
satirical attack on the poet Thomas Shadwell, whose name, at least
in the text we studied, was rendered 'Sh----'. Mr. Hassett, our
teacher,who knew how to pique the interest of teenagers,
encouraged us to believe that this was what a commentator I read
years later called a 'faecal innuendo'. It might have been, but since
'shit' and 'Shadwell' are syllabically different, I doubt it.


Still, we loved to believe it then. Mr Hassett wanted us believe it,
and he laughed along with us. He treated the rest of the poem, with
its savage wit and scatological detail, as a celebration of something
delightfully illicit too, like smoking your first joint with a grownup;
and by doing so, he made the poem seem so much more immediate,
so much more interesting, so much less of an irrelevant old
museum piece, than it might have been in someone else's hands.


I began to pay attention to poetry because of that encounter with
'Mac Flecknoe'. It primed me for my great awakening only a year
later when I bought a Bob Dylan album and heard 'Kaddish' for the
first time. After that, as I've written before, my world was
completely changed. But even today I love the satirical poets of the
Restoration and the Augustan period. I haven't gone back to Dryden
yet, but I might one day; I have 25 unread books on the floor by my
sofa, so I'd better get through those first.