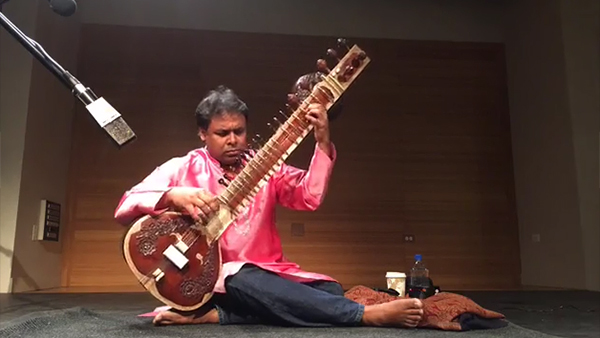 This is Gaurav Maurander. I bought a cd of his for 50 pence in a Northampton charity shop yesterday. 'Neemrana: A Musical Journey in India.' I didn't know anything about him, but I liked the image on the front of the disc. It had several people seated on a stage playing traditional Indian instruments: the sitar, the tabla, the sarod, the tampura. There was no evidence anywhere of anything remotely modern or intrinsically Western. It was unlikely, therefore, to be one of those ghastly cds you buy in alternative shops which drown traditional Asian music in soporific synthesisers and rain sounds as a relaxation aid. It was also, as I've already mentioned, only 50 pence, so if I'd guessed incorrectly I wouldn't be too much out of pocket.

The album, I'm happy to report, is a joy, although the liner notes reveal that there's a strong Western connection. The collection of musical pieces that comprised the tour from which 'Neemrana' derives were all composed by Gaurav, but he was asked to write them by two French musicians, and most of the musicians on the tour were French. The last track 'Pahadi-Dhun' was recorded in France too, although the rest are from performances in India.

Musical criticism isn't my forte, as readers of Suffolk Punch will know. Largely this is because I haven't got a clue about the technicalities of musical composition; if I knew the vocabulary of music, in other words, I might be able to talk about it better. And I understand that traditional Indian music is extremely complicated. Watch, as I have, Ringo Starr and George Harrison discussing how maddeningly elusive mastery of Indian rhythms is in the Scorcese documentary 'Living in the Material World'.

All I can say about 'Neemrana', then, is that it sounds like the India of my mind (I've never been): I don't know how, but the music evokes great heat, flat landscapes and slowly winding rivers, the air pregnant with ancient deities; it also captures the busy-ness of teeming cities. Which is precisely what I want from Indian music. The dance beats that I hear on the BBC Asian Network give me nothing I can't get on mainstream English radio; and I've rarely danced in the fifty three years I've been on the planet.

With time to spare, and curious enough to know more about Gaurav, I entered his name into the search bar on YouTube; unsurprisingly, perhaps, he's there. Each video of his also suggested numerous other traditional Indian musicians I was equally unaware of. This made me realise something interesting. I'm a relatively intelligent, open-minded and culturally aware man. But there are whole areas of the arts I know nothing about, and the determining factor in my ignorance, other than laziness (which would prevent me from digging for information hidden by the cultural selections made by an ethnocentric media), is obviously race. The only sitar players I could have named before yesterday were Ravi and Anoushka Shankar. Perhaps I need to stop expecting that my artistic inspirations should like quite so much like me?

Here's Roopa Panesar, a musician who, my research this morning shows, is well known enough to have been featured on Radio Three - not that I had a clue. I'll be on YouTube again tomorrow looking for more.