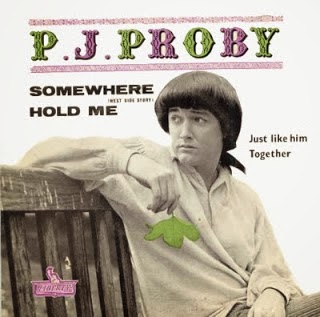 Stories about Northampton's part in cultural history always grab my imagination. This one is so indicative of its time it's great. I first heard about it from my mother years ago, who liked rock and roll even if she was never convinced by P.J. Proby; then Whispering Bob Harris talked about it on "Desert Island Discs" this morning.

Harris, who for a d.j. chose a really boring list of records by the way, grew up in Northampton. His dad was a policeman here, one of the blue boys sent out to watch the performance of P.J. Proby at the ABC (yes, the cinema that The Beatles played). Improbably, Proby had become a figure of controversy because his trousers had split when he was performing in another town somewhere. The young American star was under strict orders not to cause a repeat of this wardrobe malfunction with his onstage movements.

But in Northampton his trousers split again. This was too much for the custodians of the uptight morality of the times and the show was stopped by Whispering Bob's dad. Proby released a single afterwards called "I Apologise" which made the Top Ten, but by all accounts his career was never quite the same again. Who would want to book an artist so obviously intent on corrupting the youth of the nation?

Incidentally, a little background research on Proby's later career reveals that he has recorded not only T.S. Eliot's "The Wasteland," but also The Sex Pistols' "Anarchy in the UK." I have to find a copy of them both. William Shatner's version of "Strawberry Fields Forever" was a treat for lovers of a good piss take; but P.J. Proby doing The Pistols? I can't even imagine what that sounds like.
Bob Harris Northampton P.J. Proby