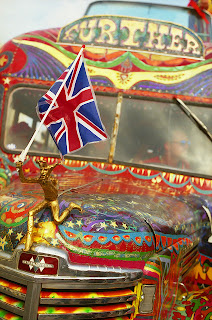 Merlin wore many hats: he was a wizard or sorcerer, a prophet, a bard, an adviser and a tutor. He appeared as a young boy with no father. He appeared as an old, wise man, freely giving his wisdom to four successive British kings. He was dotting old fool [sic], who couldn't control his lust over beautiful women, who hold him [sic] in fear and contempt. He had even appeared as a madman after bloody battle, and had fled into the forest and learned how to talk to the animals, where he became known as the Wild Man of the Woods. Merlin was the last of the druid, the Celtic shaman, priest of nature, and keeper of knowledge, particularly of the arcane secrets.
(Source www.timelessmyths.com)

In August 1999, legendary author and counter-culture icon Ken Kesey came to Britain with Ken Babbs and the Merry Pranksters in search of Merlin. That was the ostensible purpose of their month-long tour of British towns and cities, which was being sponsored by Channel Four as part of its Summer of Love season. Kesey, Babbs, Mountain Girl and a large entourage of family and friends were here in Albion to find its ancient wizard, who according to the legend was scheduled to make an appearance of his own before the millennium.

Of course, that was only the cover story. Kind of. Kesey probably didn’t believe he could find the mythical Merlin any more than those other folks believed they could levitate the Pentagon at the height of the Vietnam War. That was symbolic protest, psychic intimidation; and the Pranksters had never even gone that far in dealing with the iron in the soul that makes nations weep and kill. They had left town in the other direction before most serious political protest even started in the Sixties. Their thing was different. It’s hard even to explain what their thing was. A refusal to engage in the ideology of protest as well as the ruling ideology, perhaps . . . what academics might call a rejection of binary oppositions, which in some ways are mutually reinforcing.

The Pranksters just did what they did. They had fun, unco-opted by anyone on the left or the right; and if you understood what they were into, the spectacle of it must have been tremendously liberating. You could argue that their influence ended up liberating a whole generation of young people. After all, what was Woodstock if not a giant extension of the community of colourful, zany, mutually-supporting friends who rode Kesey’s bus Furthur around America in 1964 (the year I was born)? 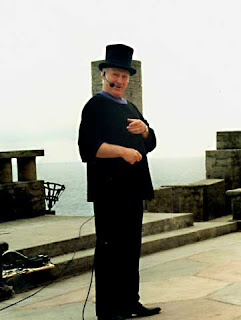 That sense of fun and liberation is what the Pranksters were being paid to bring to Britain in ’99. Blair’s Britain. It’s hard to remember now, but before those planes hit the World Trade Centre towers in 2001, this country was in the middle of a long (and ultimately economically destructive) party, with a popular—yes, I know, I scratch my head too—Prime Minister and a culture bouncing with youth and optimism. And after the conservative strictures of punk rock and Thatcher, the 1960s had somehow been transmogrified by distance into the emblem of a time that shared little with it except, on a purely sentimental level, a yearning for something more spiritually elevated than shopping as the national pastime.

The most popular band of the era, Oasis, said The Beatles were their heroes. Blair himself had been in a fledgling group at university and claimed he like The Stones. It was inevitable in that sort of cultural climate that Kesey’s brand of coyote-ish lunacy was going to be in demand, even if half the country was on drugs now and it didn’t seem to have helped anyone very much (except drug dealers). But that wasn’t Kesey’s fault or his problem. He wouldn’t have claimed that he was here to do anything more than relive old kicks and make a few people happy along the way; and you can’t really argue with that as the rationale for anything. After illness and the quiet years spent in Oregon when all the madness was over, the Merlin Ken hoped to meet on the trip was probably the man in the shaving mirror.