The Elephant Man: Joseph Merrick Gets a Lynching 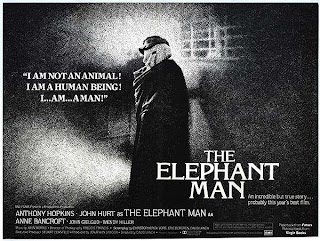 I saw David Lynch’s ‘The Elephant Man’ for the first (and I would imagine the last) time the other day. I was more interested in watching Clint Eastwood and Burt Reynolds movies when it was released in 1980, being a late developer culturally in some ways, but I thought, at 48, that I was ready. Friends had told me it was terribly sad. Harrowing even. They said that the suffering of the famously disfigured John Merrick was almost unbearable to witness. Hmmm.

Call me a callous old bastard if you like but I didn’t find it that at all. It might have been, and I’m sure it was for the real man the movie was based on (who was actually called Joseph Merrick), but Lynch and John Hurt laid on the pathos of the Elephant Man’s existence with a giant trowel. He was so completely pitiful in his vulnerability I expected a syrupy children’s movie chorus from lamby glove puppets after every beating he took and every disappointment he sustained.

I would have liked to see how ’s suffering had twisted him. It doesn’t matter whether the contemporaneous accounts they used when writing the screenplay gave any indication of this. Those accounts were written according to the conventions of their time just like anything else is, and the people who met ‘saw’ him with an agenda of their own. Being harshly treated makes people cruel and angry. I would bet money that once doctors and nurses, and then society folk, began to be kind to Merrick he responded with occasional bursts of temper and spitefulness.

The movie has, of course, dated. Merrick’s make-up would have been more convincing if the film had been made in the last ten years; and Lynch’s Victorian-barkers-and-midgets-in-top-hats kind of surrealism, though undoubtedly a filmic surprise 33 years ago, when realism was more commonly used by directors, just looks transparent and precious now. It's something we’ve all seen before. The language of alternative cinema has been absorbed into the mainstream since the 80s. It’s routinely regurgitated nowadays in the form of music videos that flash by unwatched on tv while we’re talking to our friends.

So anyway, that’s one unanswered question from my youth finally answered. Is ‘The Elephant Man’ any good? For a slow afternoon when you have nothing better to do, yes; but don’t expect the grand emotion of an opera. I wonder if I should answer the other great question hanging over from those long-gone days and watch ‘Star Wars’. See what all the fuss was about there.

I think not. At the last reading Alan Moore gave, the great bearded one said 'Star Wars' was when SF started going downhill. I'll just take Alan's word for it and save myself the time, the money and the inevitable dribbling, remote-control-dropping, two hour nap that the movie would almost certainly cost me.﻿