A Step Away From Them

on December 13, 2012
First
Bunny died, then John Latouche,
then Jackson Pollack. But is the
earth as full as life was full, of them?* 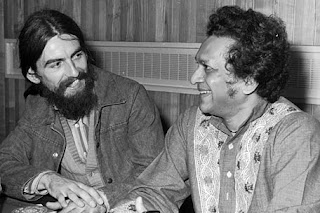 RAVI SHANKAR, virtuouso sitar player, whose death aged 92 was announced yesterday. He is pictured here many years ago with his student and friend George Harrison. How bare the world sometimes seems when great men and women leave it.

Incidentally, can we stop, for a moment, referring to Ravi as the father of (S)Norah Jones? I think his achievements were significant enough to be considered in their own right.

*Frank O'Hara "A Step Away From Them".

tom said…
Hi -- they are all missed. Good to see you are back and blogging again. I should start again too.
Might start up a small zine in the spring sometime. Love to have something from you. More later.
12:54 PM