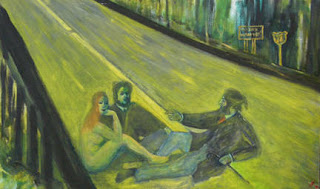 "After-image" by Lawrence Ferlinghetti, cover art for The Lowdown

As for Mr. D. knocking at the back door,
the poet’s not in,
so fuck you
for now
(from “Mr. Death at the Back Door” by Norbert Blei)

I approach the idea of reviewing the literary arts annual The Lowdown with a sense of heavy responsibility in a way. As far as I know it was the last literary project Norbert Blei undertook, in partnership with poet Robert M. Zoschke, and that makes it significant, in literary terms. Norb was a heavyweight; his passing leaves a gap in the lives of a great many people who knew him in person, or on the page and the computer screen. When a light like that goes out, you want to write BIG enough to do it justice.

But leaving aside all that – I suspect Norb wouldn’t have much time for it anyway – The Lowdown, edited by Zoschke, is just a really superior book. Its 236 pages assemble many of the best poets working in the small press (which in general is the only press worth reading) from the last fifty years. d.a.levy is here; Steve Dalachinsky (who also provides some beautiful collages) is here; S.A. Griffin (plus collages) and t.kilgore splake (with poetry and photos) are here; Ralph Murre and Sharon Auberle are here; Scott Wannberg is here; Geoff Stevens is here (I once thought Geoff a kind of demon because he had the royal nerve to reject some of my poems [they were crap]); A.D.Winans and Catfish McDaris appear – Catfish offering, among other things, a poem called “My Magnum Opus” which my girlfriend read to me last night, making us both laugh out loud. I won’t quote it here, though. That would be like giving away the plot of a movie. And Lawrence Ferlinghetti, who published “Howl” and to some extent kicked off the Beat Generation and all the small press/ underground waves that followed it, has furnished Zoschke with the painting for the cover.

The list above only covers a third of the contributors to the book. I will list all of them at the end of the review to give everybody fair exposure and eliminate the possibility that I am making The Lowdown seem less interesting with my own unconsciously prejudiced selections.

There are only three prose works in the annual: “Trespassing” and “Wild” by Sam Pickering, a new writer to me (according to the author bios in the final pages, that places me in a very small minority in the intelligent world); and “On the Road, the Movie?” in which Gerald Nicosia recounts the genesis of the recent Walter Salles movie, the story of his own involvement with the project and his feelings about the finished work. He seems to feel the way most of us do: it was a good stab at a novel that would always have been difficult to film, but with the talent Salles had personally and the people he had gathered in the crew, it could have been a whole lot better. Indeed.

It is often a bad idea for poets or writers to include their own work in something they edit. I never did when I was editing Beatnik, my weekly online poetry blog; I was always a poor judge of my own writing and I knew it. Robert Zoschke has taken the risk by including some of his in The Lowdown; but his gamble pays dividends to the reader. Rob was always a good poet, as his collection Made in America testified a few years ago. Now whatever he has been through in his life and because of all the hard nights he has spent at the writing desk, just working, (which is the only way), he has become a poet of real force and power. Very little I’ve read lately matches the kick-in-the-guts confessional honesty of poems like “noxious river”:

Pretty strong meat, eh? But I’ve been through the shit myself in the last year or two and I can take my meat strong, even though I’m a vegetarian. Rob’s telling the truth about where he’s been and what he’s felt along the way; no posturing in the literary manner and no pretending that he’s tough and doesn’t care either. “Write what you know,” instructors always tell poets. It’s remarkable how few take the advice and wind up filtering what they know through the voices of all the poets they have heard.

There’s a similar honesty in (as you might expect) A.D. Winans, who debunks the post-Bukowski myth that poverty is romantic in “Down and Out”:

The unifying themes of The Lowdown, if it can be said to have any, are art and life: the loveliness of both, the madness of both and the terrible pain that both can cause you if you turn your back for just a moment. That’s Rob’s wisdom as editor and the old intelligent eye of Norb, which watches over the book  now as it travels on its way across the country and with any luck, the world, to eager, receptive readers. The love Norb left behind is memorialised in poems by splake (“missing norbert blei/our father norbito” – “rest in peace”) and Ed Markowski in “Winter Wind”:

Then Zoschke brings those of us who knew Norb to our knees with an epistolary poem to his departed cohort, imagining him among dead friends and heroes in some bar in Heaven (Norb was a native):

Ah, Zoschke, you swine, if you’re going to do things like that you should send out free handkerchiefs with each copy of the book! (Really, I read that out loud and it made me cry because I know that the poet means every single word.)

The Lowdown might seem a little expensive for some poetry aficionados when considered sight unseen (even after a glowing review); certainly some of my literary compatriots have told me they were interested, but felt they couldn’t afford it. But it’s so sumptuously decorated and presented, and its collection of poets and artists is so fine, it might be worth prioritising this over two or three other purchases in the literary field this year, if you can. You won’t find anything better in any of the book shops I know of, however much cash and supposed expertise the major publishing houses have behind them. And proceeds from sales of The Lowdown don’t go to stuffy, arrogant shits at Faber; they will fund a scholarship in the name of Karen Teskie, an artist featured in the annual who died tragically young in a car accident. That’s high motivation and deserves whatever reward we can give it. 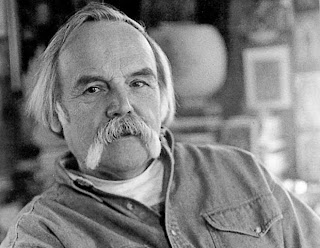 Bruce Hodder said…
Perhaps I'm slow on the uptake, but my partner pointed out to me today that Ferlinghetti's painting transposes three of the characters from Manet's painting "Le Dejeuner sur l'herbe" to a modern urban setting - Kerouac's road, you might say. Interesting statement Lawrence.
7:57 PM